What makes El Nido special is the combination of ~45 karst islets and islands nearby, all surrounded by crystal clear waters.  El Nido's premier attraction of Island Hopping, involves taking a boat to visit those different islands, beaches, and lagoons, while doing some snorkelling and kayaking activities along the way.

The local tourism authorities define the 4 standard island hopping tours that can be offered by operators (creatively named Tours A through D).  It doesn't matter which tour operator you go with - if you do "Tour A", the price and island locations will be the same for all of the operators.  That being said, some of the standard locations may be modified due to poor conditions such as strong winds and waves.  On a daily basis, the local coastguard decides which tours are cancelled, modified, or allowed, based on the upcoming day's conditions.
Tours A and C are the most popular.  While we were there, Tour C had been cancelled every day for several weeks (since Christmas).  The other tours had also been intermittently cancelled, so there was a backlog of people waiting to go island hopping.  We tentatively signed up for “Tour A or C” and our tour operator used WhatsApp to let us know (at 6am) which tours were allowed/cancelled for the day.
Tour C
We lucked out and managed to go on a modified version of tour C - we kayaked in Cadlao Lagoon, snorkelled at the Helicopter Island beach, ate lunch on a beach on Mantinloc Island, and snorkelled at Palilo Beach and Hidden Beach.  We were really looking forward to visiting the "Secret Beach", which requires you to swim through a small hole in the karst to get to it (kayaks are too big), unfortunately, this stop was removed due to strong wind and waves.  The next day, Tour C was fully cancelled again.
Here's what the main beach looked like when we were gathering to start our first tour. Not sure if this is the usual scene, or if it was particularly packed with people that day because the weather was finally better (all tours had been cancelled the previous days). 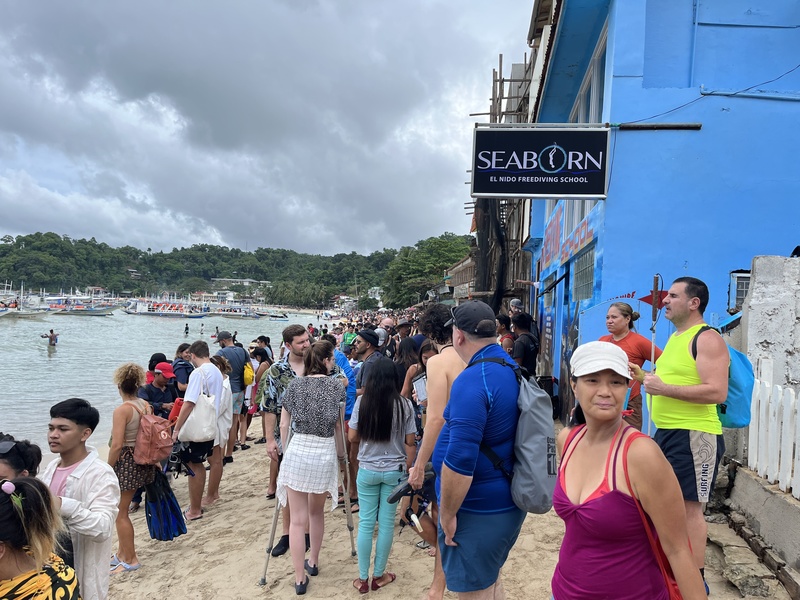 Tour A
We were really pleased with our Tour C experience, so 2 days later, we did Tour A.  Here we explored Secret Lagoon on Miniloc Island and snorkelled elsewhere on the same island.  It was really windy that day (56km gusts), so instead of eating (a lot of sand) on the beach, we ate on the boat shielded by the karsts of Inatula island.
We were then supposed to kayak in the Big Lagoon, but someone messed up the Blue Lagoon permit paperwork, so they would not allow us to enter.  We ended up doing Cadlao Lagoon for a second time, instead, and then finished by visiting 7 Commandos Beach.  We still had a great time, but we were a bit sad about missing Blue Lagoon as it was the highlight of this tour.
Here is a short video of our experiences on tour A and C

Download IMG_1271.MOV
Hidden Beach
Hidden beach is hidden by a big karst wall.  At the opening near the wall the water gets shallow, so boats are not supposed to go in.  Since there was a strong current and big waves, we had a pretty tricky swim to go from our boat to the calm lagoon area.  Jen got to practice her lifeguard skills, towing one of the other tourists back to our boat because he couldn't swim.  Once we arrived at the Hidden Beach, we spotted some cute little black-fin sharks swimming through the crystal clear water. 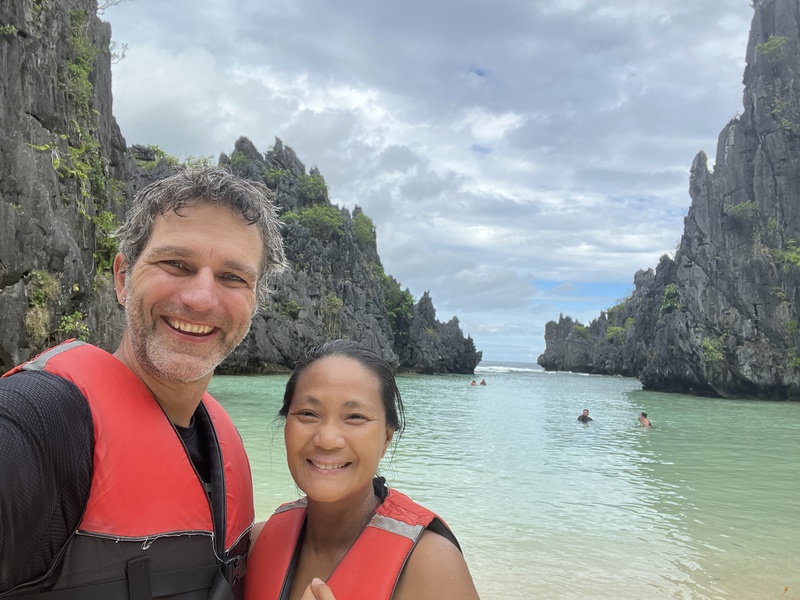 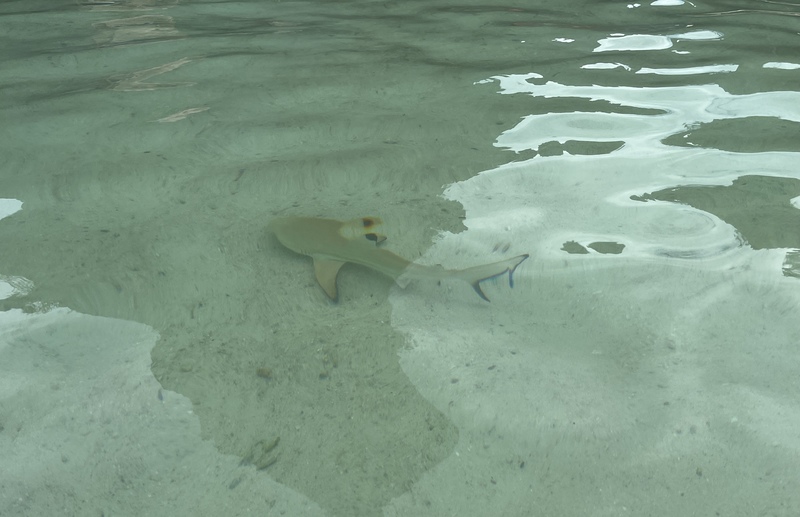 Cadlao Lagoon
This was a really nice lagoon with clear water at the beginning and then silty blue water at the end. On our first tour we kayaked here for about 1 hour. On our second tour, we decided to snorkel and saw a group of clown fish. 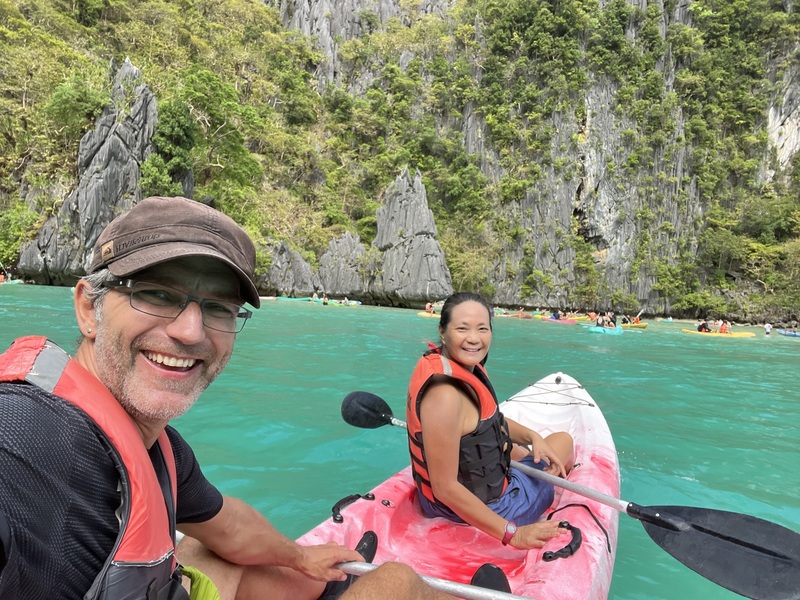 Helicopter Beach
It was just a beach, but it was nice.  There was supposed to be good snorkelling here, but the seas were choppy when we went so the visibility was too poor to see anything. 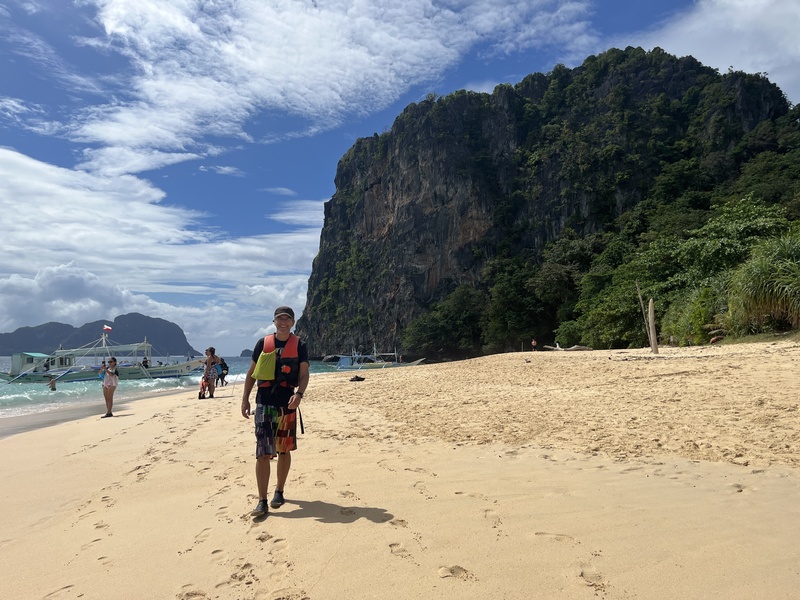 Secret Lagoon
Off to the side of one of the beaches, there is a hole in one of the karst walls.  Once you go through, you end up in a small lagoon that is entirely surrounded by natural walls.  We luckily arrived early so there weren't that many people, but as we were leaving, there was a big line starting to form.  Later that evening, we overheard other tourists saying they waited an hour in line to get into the Secret Lagoon. 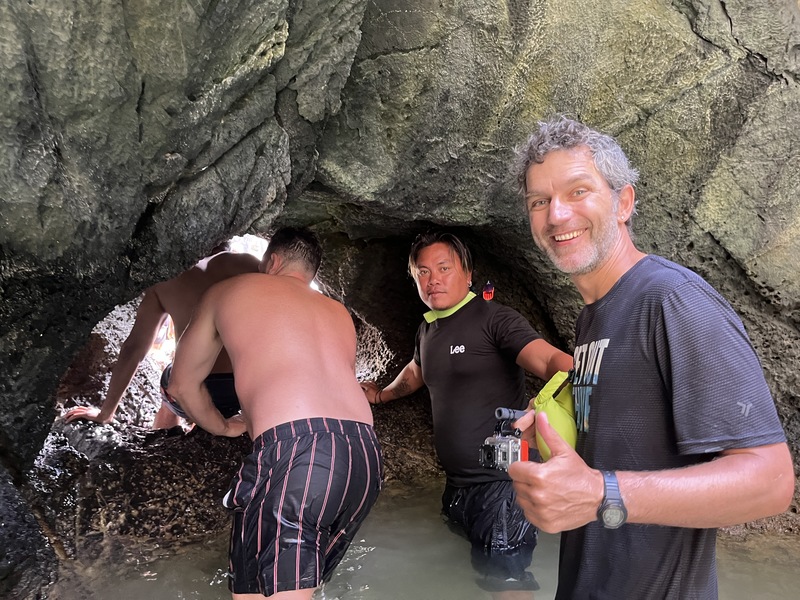 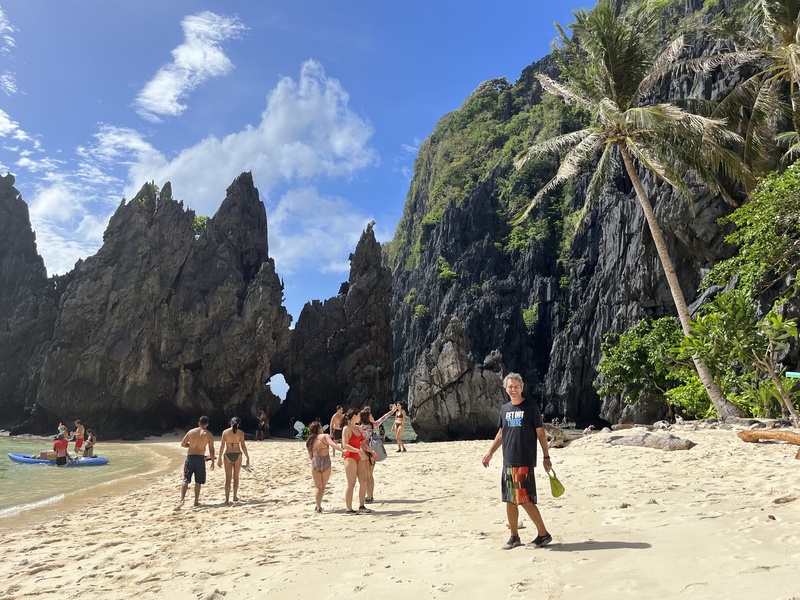 Snorkelling
We stopped at a few different snorkelling spots during our 2 tours.  Since conditions weren't great, we didn't see very many fish, but we did see a purple clam, a few clown fish, some blue star fishes, a couple of parrot fish, and some other random small fish/sea creatures that we don't know the names of 😂. 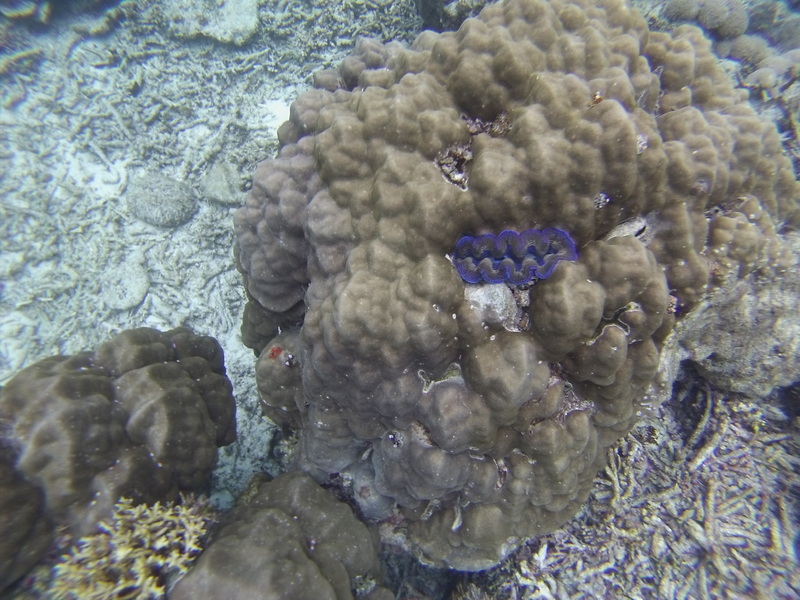 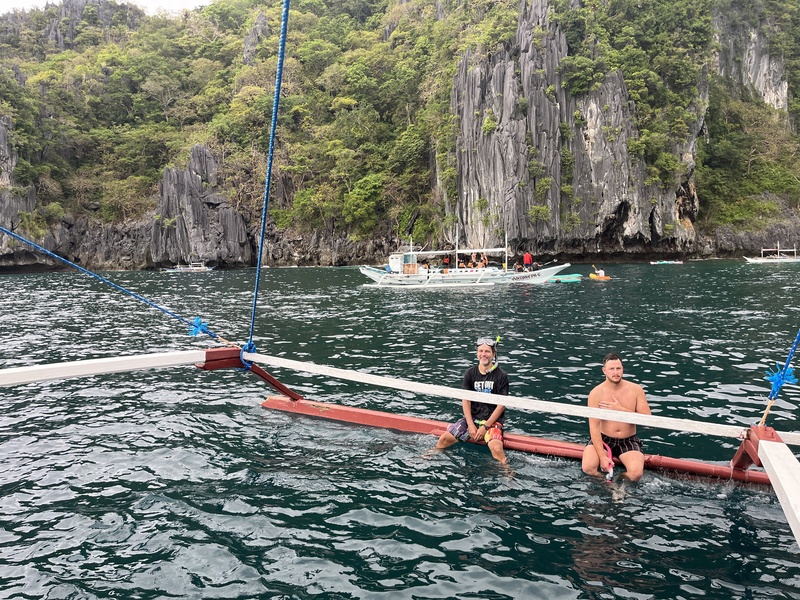 Lunch
The lunch on our first tour was quite spectacular.  While we visited the various tour stops, the boat chefs prepped the meal.  At around 13:00, we arrived at a small beach and the crew floated a table and the dishes over to the beach, in a kayak.  We had a wonderful feast!
On our second tour, because of the high wind, we ended up eating on the boat sheltered by an island. It was still nice, but less spectacular. 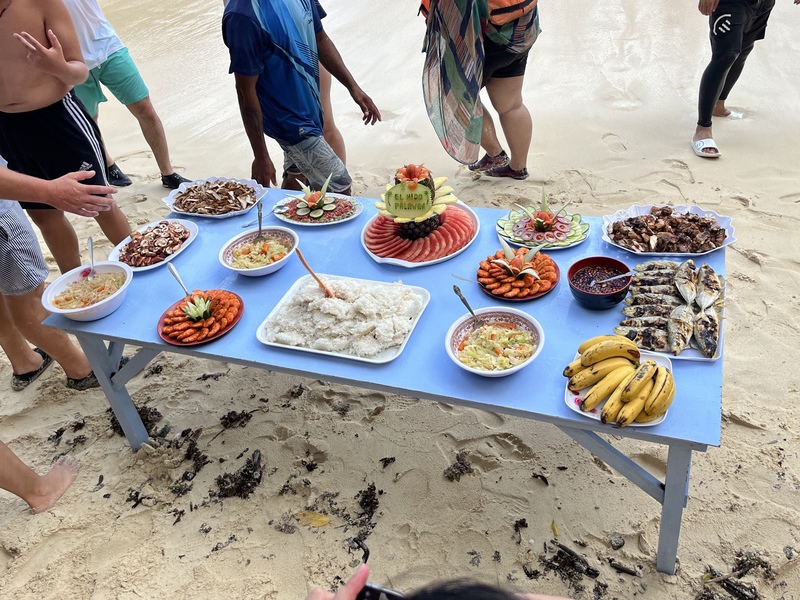 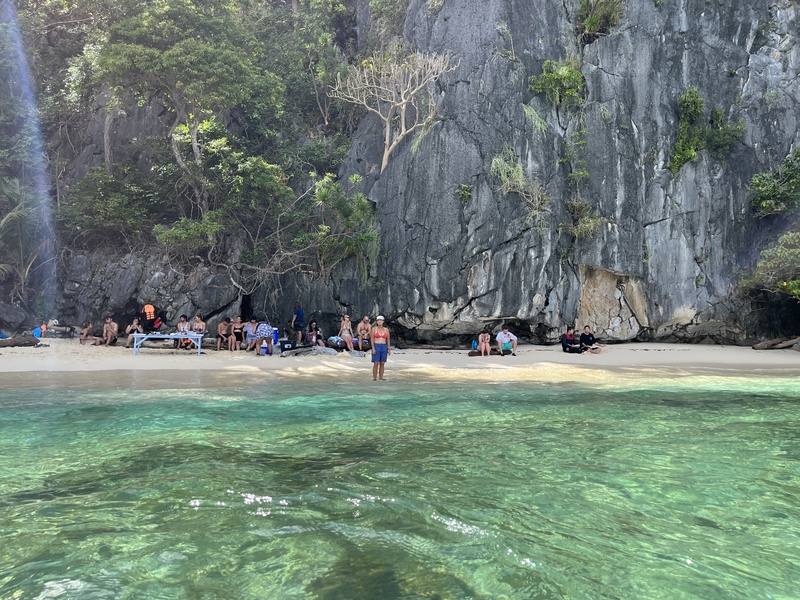 Boat's Personal Space
In El Nido, it seems that the boats don’t have any personal space. Even if the area is crowded, they go in as close as possible to their destination and then when it’s time to leave, the crew have to figure out how to untangle the pontoons.  The pictures show the crew struggling to free one side of the boat, while the other side is completely deadlocked 🤷‍♂️ 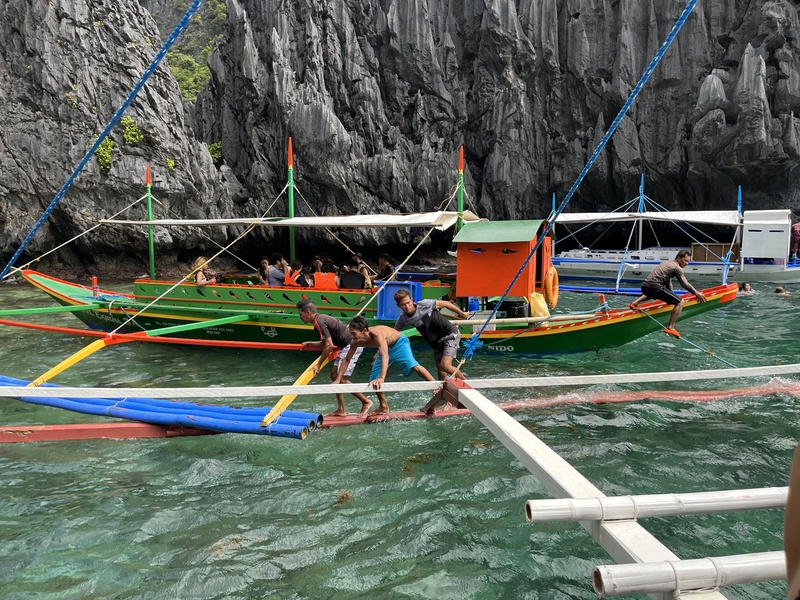 We were amazed at how affordable the island hopping tours were (~1400php, $35cad / person) for the full day.  It's worth noting that there were a couple of additional expenses that we didn't find out about after we were on the boat:

El Nido is a small town in Northern Palawan, which is surrounded by limestone karst cliffs and unspoiled islands that have stunning blue lagoons and white sand beaches. It used to be a fishing village, but because of its natural beauty, it became a tourist hub.

From Puerto Princesa, it was an uncomfortable 5 hour ride, zig-zagging through the mountains in a 12-passenger minivan packed full with 14 people… but we finally made it.  Maybe we were tired from the journey, but our first impression of El Nido was not the greatest - it was noisy, crowded, and lacking charm.  We quickly learned that Palawan was suffering from energy and gas shortages, so El Nido only had power 12 hours per day while we were here (from 8am to 2pm and 8pm to 2am).  The result was that each establishment ran huge noisy generators during the other 12 hours of brown-out time, filling the small town with inescapable noise and exhaust fumes. 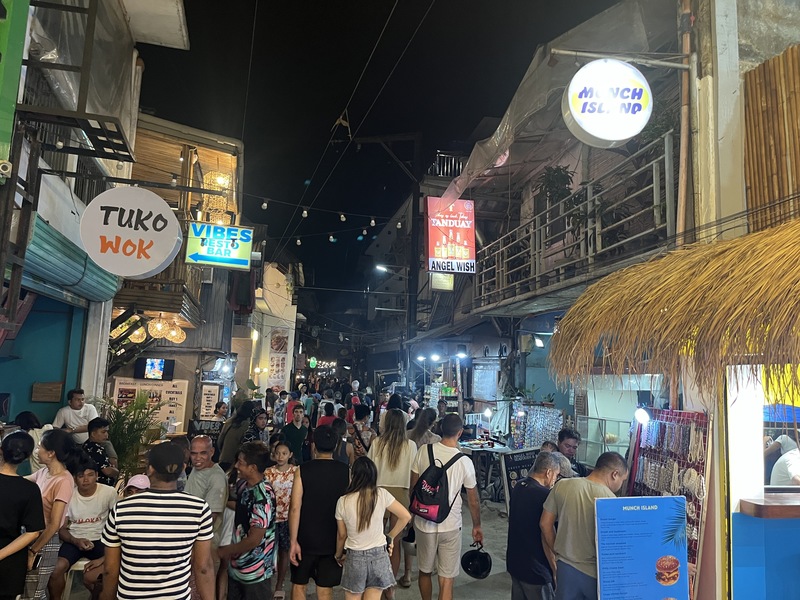 Fortunately we had several buffer days here, so we spent the time walking around town and nearby beaches to take in the scenery. 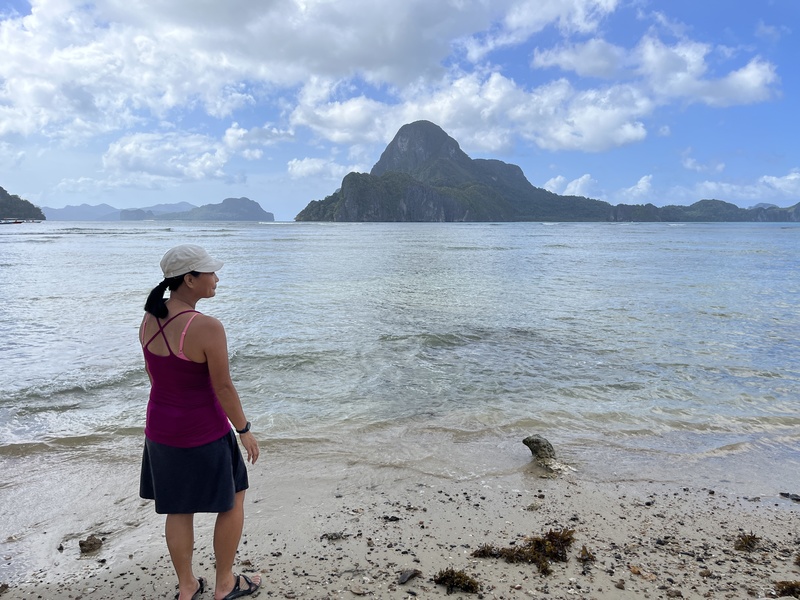 After a good meal and some sleep, we re-framed our minds and started to appreciate the small, scenic El Nido for what it was. 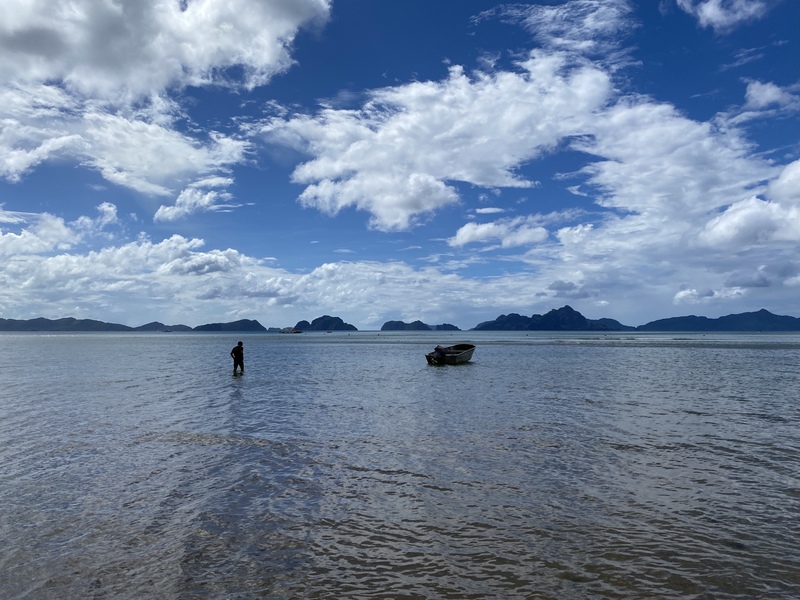 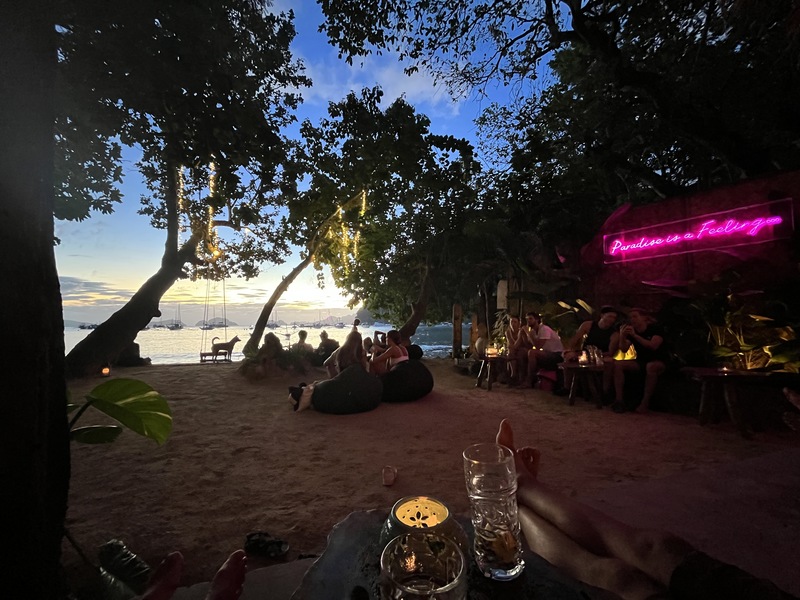 We also did a 45 minute canopy walk above the city.  Although short, it does give you a great view of the town and bay. 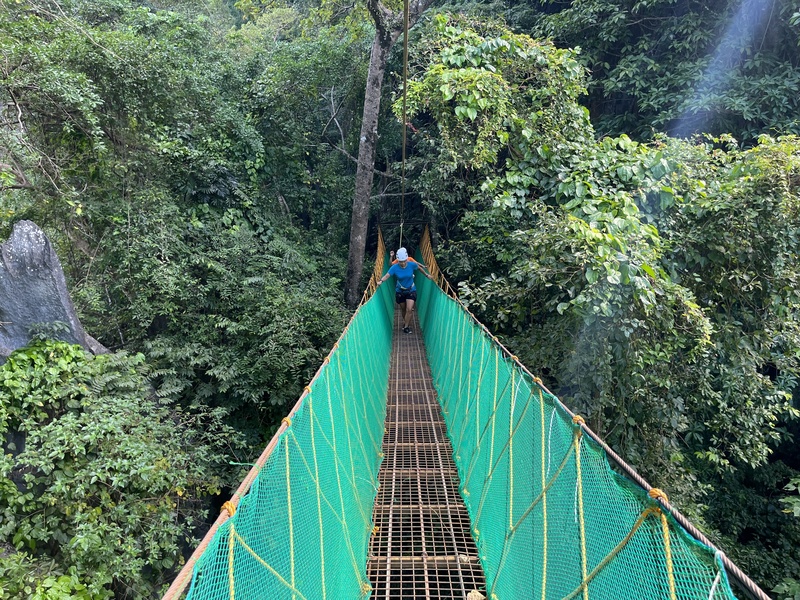 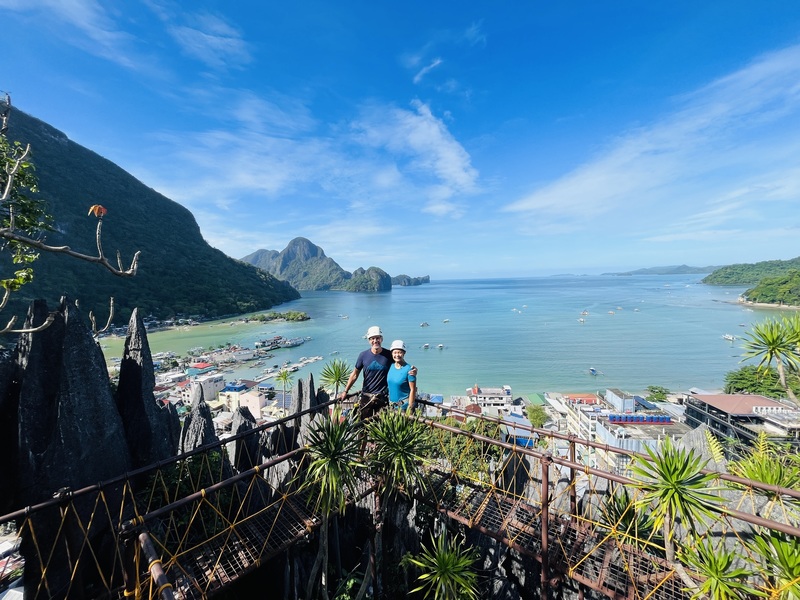 One of the unusual/cool things we encountered during the canopy walk, was the rock that sounded like a bell.  According to our guide, they tap and listen for this sound in the rocks to determine whether the section of rock is solidly attached to the surrounding cliffs, or loose/broken-off (hollow bell sound).
Download FullSizeRender.MOV

Our first stop in the Philippines was Puerto Princesa.  We didn't have any special reason to go here other than it being the best flight  that we could find from Taipei to Palawan (ie. shortest duration with a reasonable price, but.. it departed at 1:30am on New Years Day).

We took a post-redeye rest day to wander the town.  Everything was closed on New Years day so it was a very quiet and slightly eerie introduction to the Philippines.  A few restaurants were open so we discovered a popular Filipino dessert called Halo-Halo.  Since the dessert is based around shaved ice, we imagined something similar to (flavourless) snow-cones and were quite skeptical at first.. but it turned out to be really delicious!  We ended up trying it at 2 different places, Mang Inasal and Noki Noc's.  We preferred the one at Noki Nocs because the ice was smoother / less chunky. 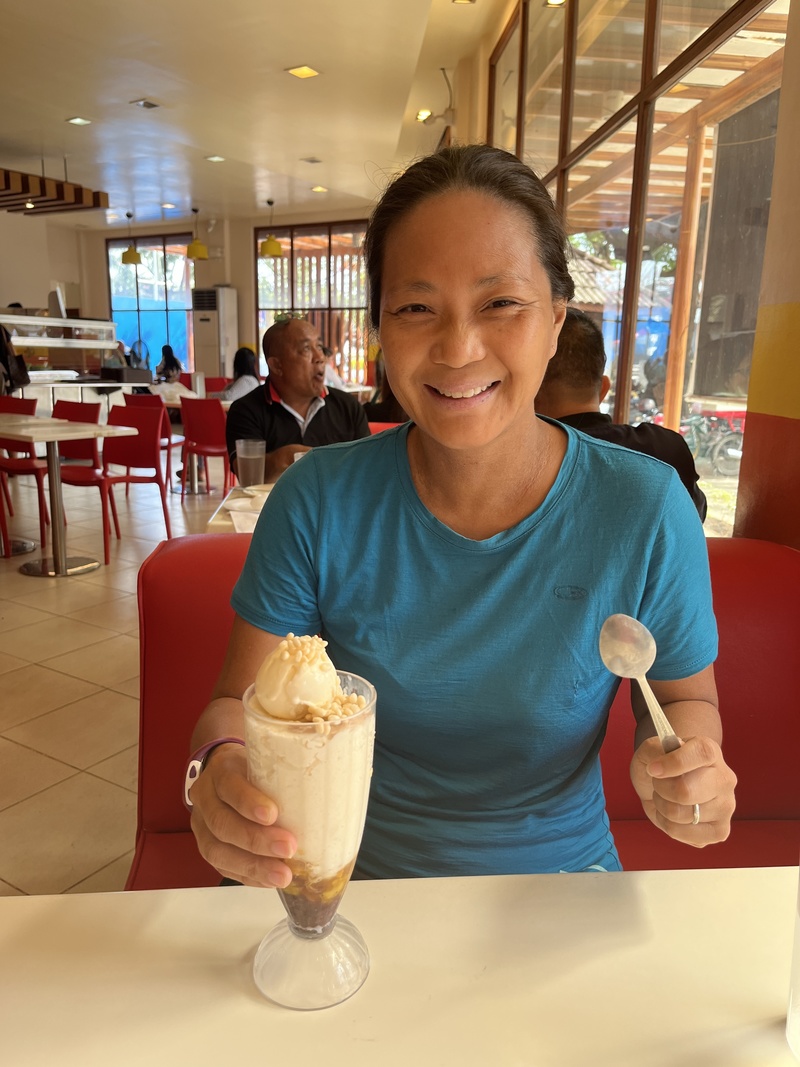 There isn't much to do in Puerto Princesa other than visit the Puerto Princesa Subterranean River UNESCO site, which is now one of the New 7 Wonders of Nature.  At 8.2km long, it’s one of the longest underground rivers in the world.

To get there, we took a 90+ minute car ride to Sabang, followed by a 30 minute motorboat ride to a beach near the cave.  We then walked through the forest to an area where we were given helmets, audio guides, and assigned to a small rowboat. 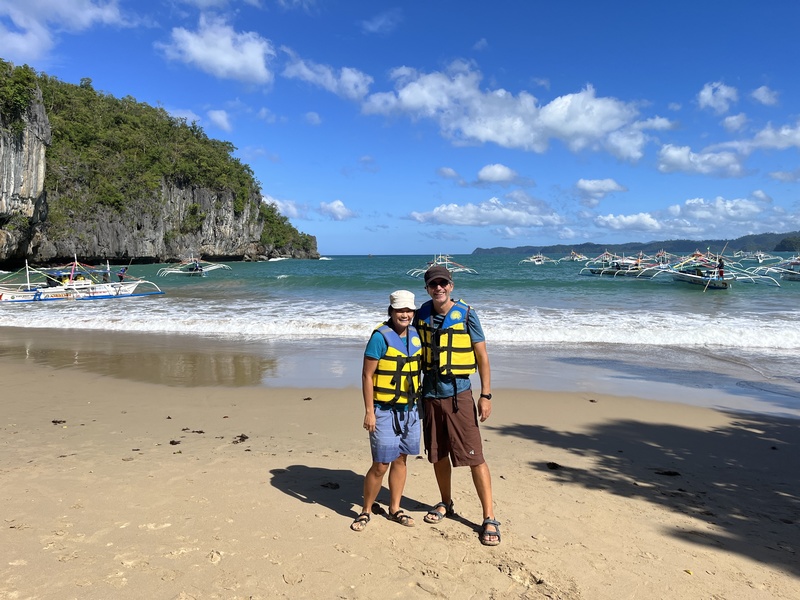 The cave tour only goes in about 1.2km (of the 4.3 km that are navigable by boat).  We spent about 35 mins inside the cave contemplating its wonder while listening to the audio guide.  The audio guide was well done and helps ensure that tourists remain silent during the cave visit, to reduce disruption of the delicate structures and wildlife (ie. bats) that the cave is home to. 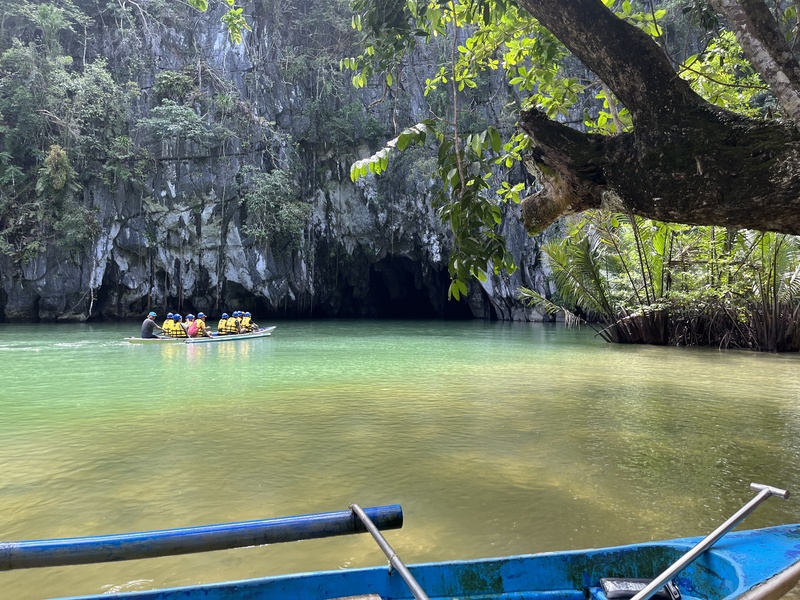 After the cave tour, we took a boat back to Sabang where we had a buffet lunch, and then drove back along the narrow winding road to Puerto Princesa.
Apparently, we lucked out with the tour because previous days had been cancelled due to bad weather and choppy waves.  Overall, we enjoyed our day, but we did wonder if it was really worth it given that it took ~6 hours of transport+waiting time (there and back), just to see the cave for only about 30 mins.. 🤔
Browse the Archive »