Not far from Lisbon, there is a weird Lego-like palace called Sintra. It looked really vibrant and so different from other castles we had visited in the past.
The Pena Palace was built in the mid-1800s on top of an old monastery. It was built as a royal summer residence but is now a royal attraction. If you want to know more, check out Wikipedia: https://en.wikipedia.org/wiki/Pena_Palace 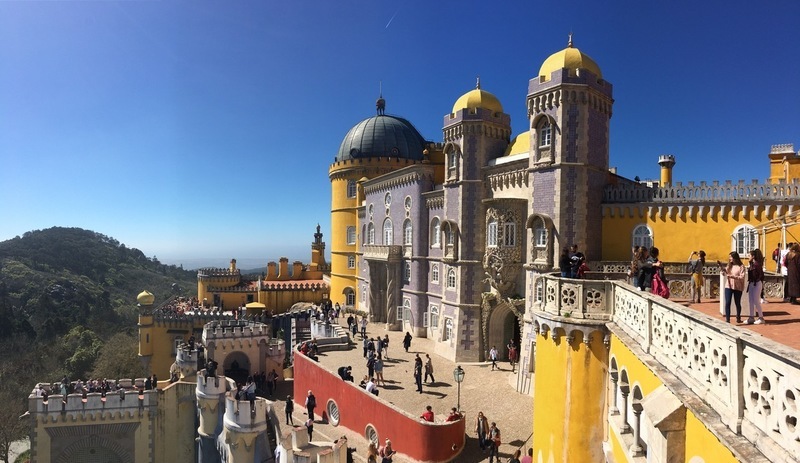 After our stroll of the colorful palace, we walked over to visit another castle on the adjacent hill, overlooking Pena Palace.  This castle felt completely opposite to the Pena Palace.  Where Pena Palace is bright and vibrant, the old Moor castle is dark and gloomy. It was built by the Moors in the 8th and 9th centuries and is really worth the walk as you can go around the battlements and see the scenic surroundings. (https://en.wikipedia.org/wiki/Castle_of_the_Moors) 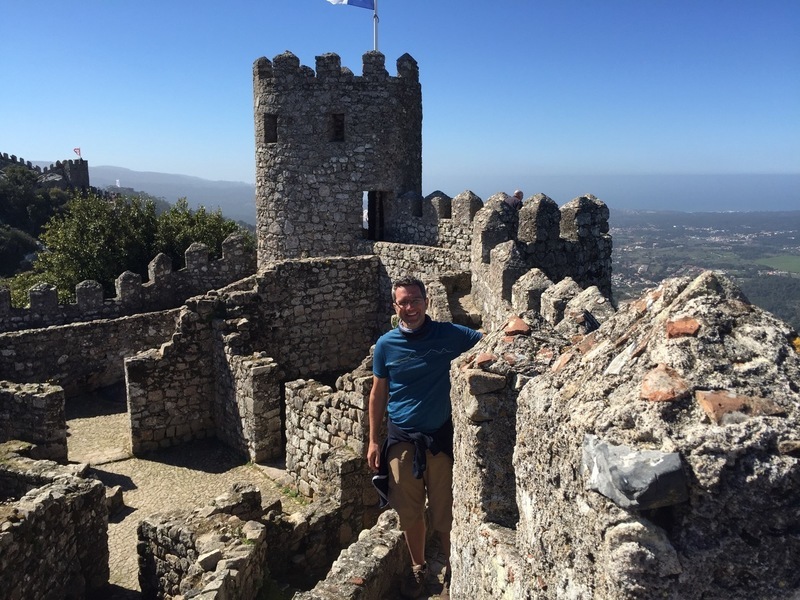 The trip took us a full day and involved a lot of walking.. but it was definitely worth the visit. :)
While in Lisbon, we wanted to go to a nearby town called Belem.  To get there, we decided to try out some electric Lime scooters for the first time! 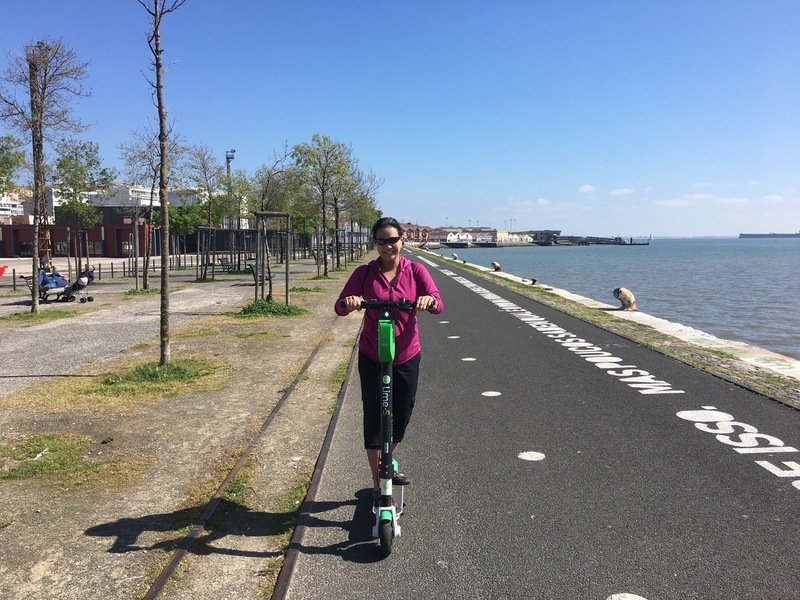 We zipped along the coast toward Belem and stopped to admire the sites along the way. 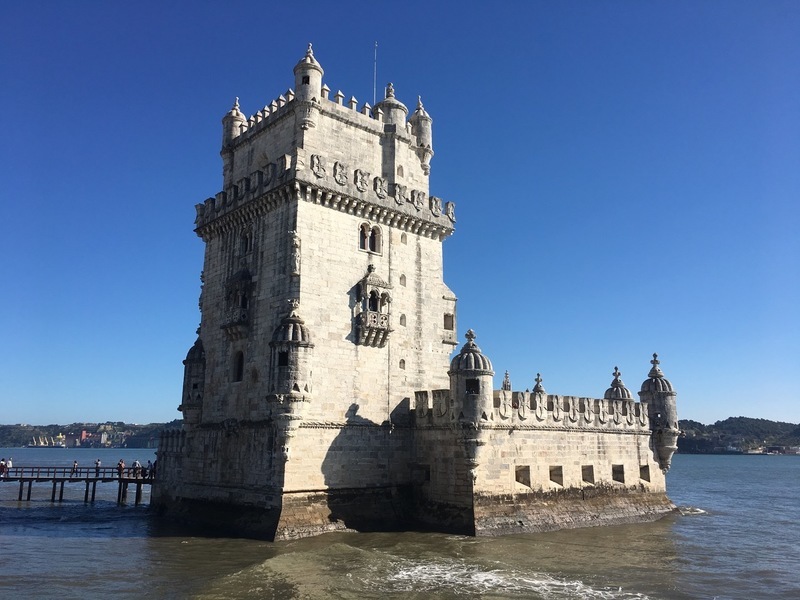 We also stopped at the famous Pasteis de Belem, the bakery that makes pastel de nata using the original secret recipe from the Jerónimos Monastery. The line outside is huge, but it is actually just for people who are getting items for takeout. 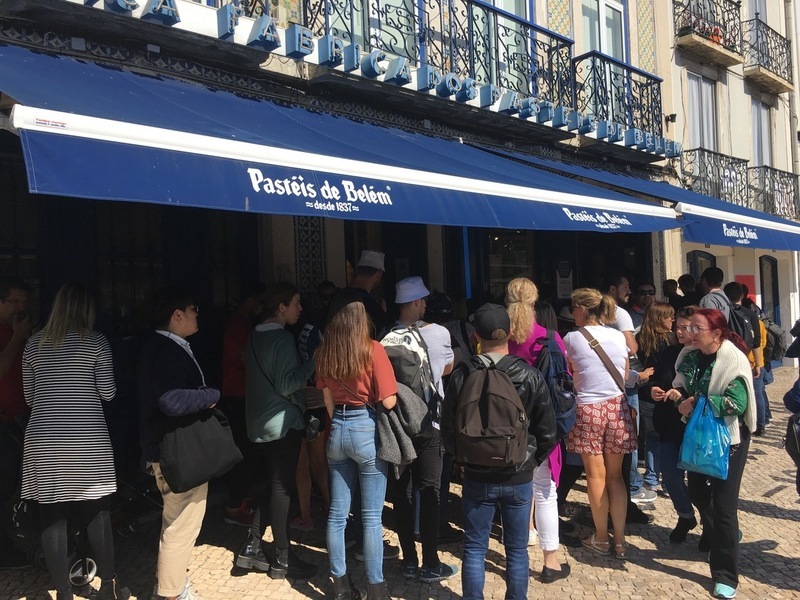 The actual restaurant seats hundreds of people, so if you by-pass the line and go inside, you will pass through several different rooms where you can easily find a free table and enjoy some fresh tasty treats and meals for a great price!  We lucked out and got a seat on the patio where we had a nice relaxing lunch... with extra dessert :) 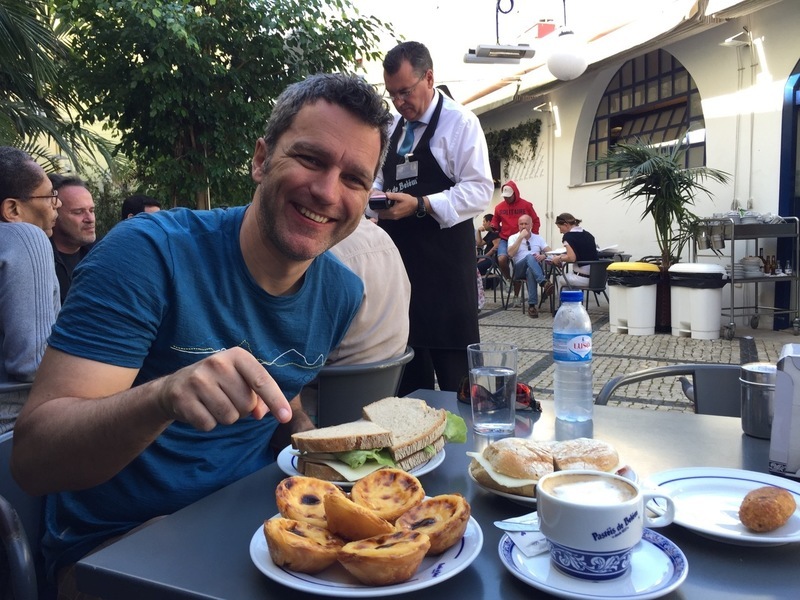 We enjoyed our trip to Porto so much that we decided to check out Lisbon!
Lisbon is the largest city in Portugal, built on 7 hills (or is it 8?), home to the longing "Fado" genre of music, and most importantly.. sacred keepers of the original Pastel de Nata recipe! 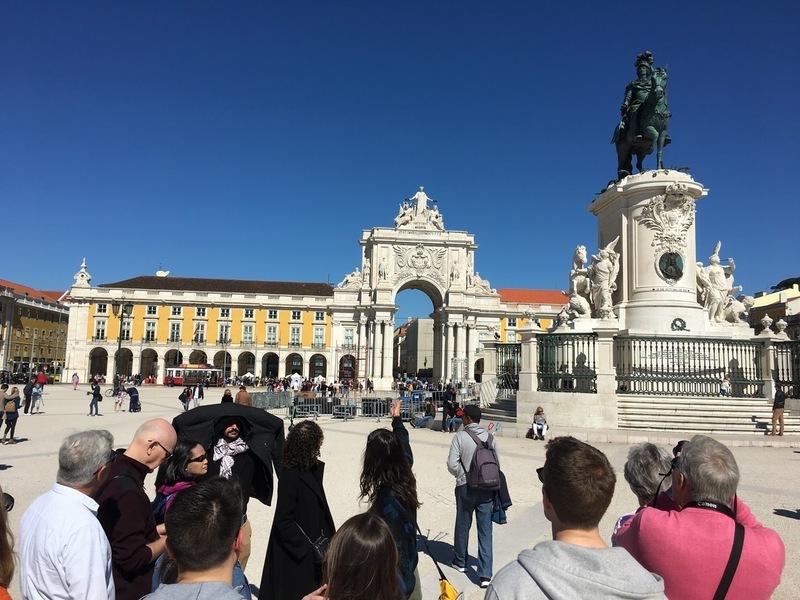 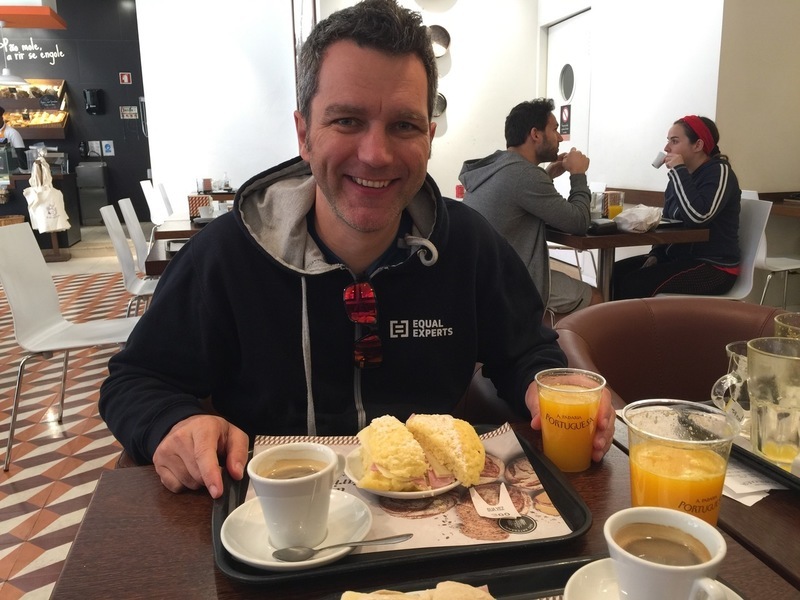 Since Pastel de Nata originated here, one of our missions was to taste-test as many as we could (without making ourselves sick ;) ).
The two places we liked the most were Manteigaria 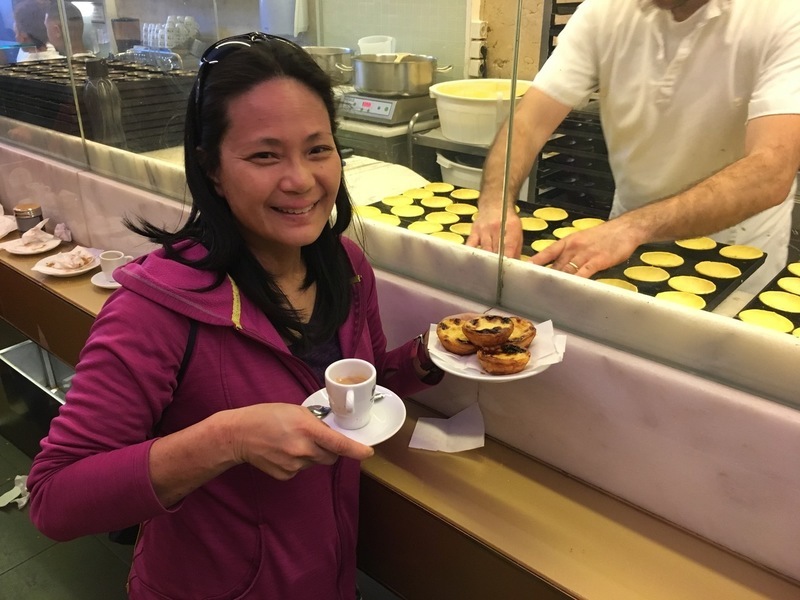 and Fabrica da Nata, which was recommended by our apartment host 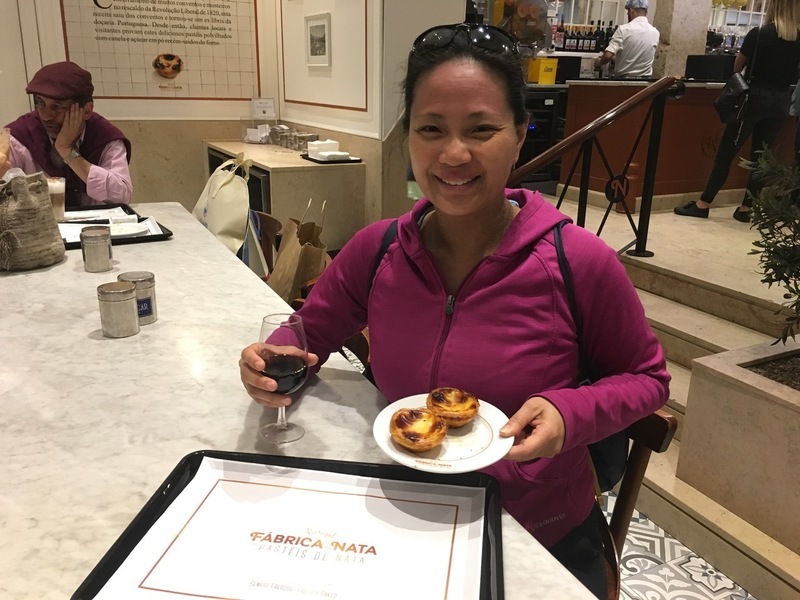 Thanks to Dom's research, we also discovered that we could do a workshop at Pastelaria Batalha to learn how to make them ourselves!
Although the class isn't set up in a way that you can each individually make the pastries yourself, our chef kept it interesting and tried to have us participate in as many steps as possible. In the end we learned a lot, had fun, and got to eat more Pastel de Nata :) 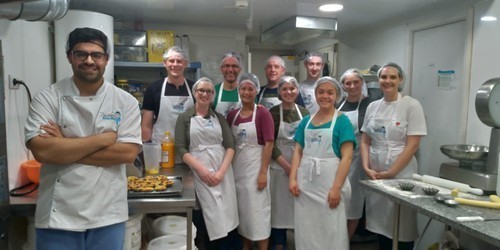 Porto has been on our list for quite some time, but we never managed to get over there until now … and it was really worth it!
Porto is a great town with lots to see, do, drink and eat. We spent 3.5 days there and would have happily stayed several more. The fact that it was hot and sunny definitely helped ;).
One of the first things we did was a walking tour with Porto Walkers to get some insight into the history of Portugal, Porto, and Gaia. Here are some fun facts according to our guide: 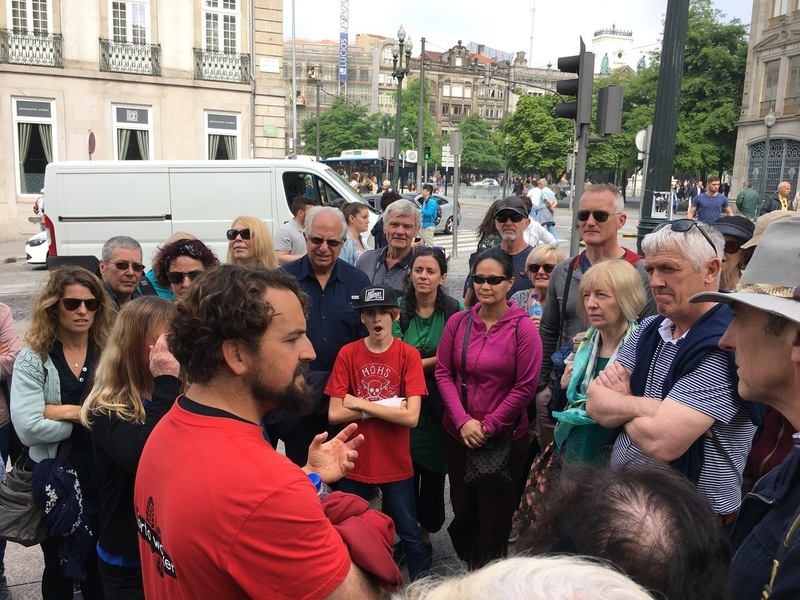 One of the things Porto is most known for is Port Wine, but all of the port cellars are actually located in Gaia, the city across the river.
We did a port wine tour that took us to 3 port cellars (Ramos Pinto, Quinta Santa Eufemia and Porto Cruz), where we tasted 7 different ports (white, pink, ruby and tawny).
More interesting facts from the tour: 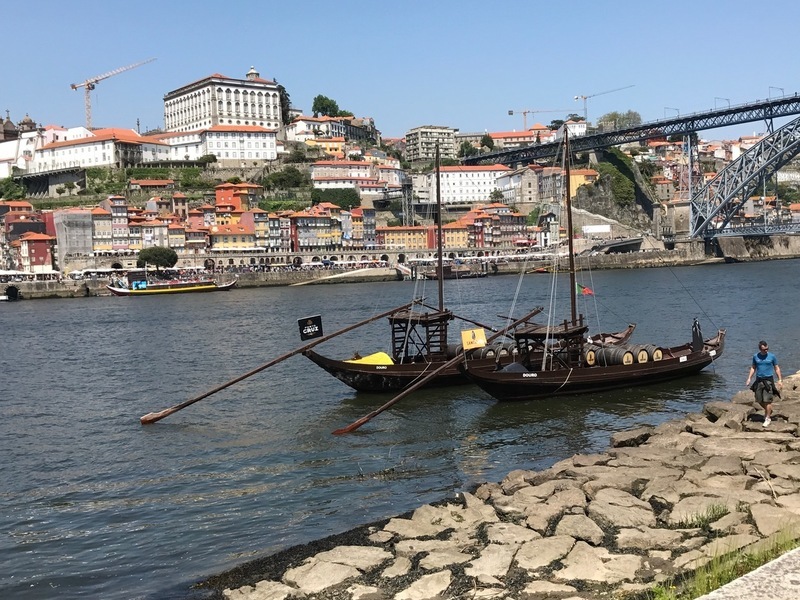 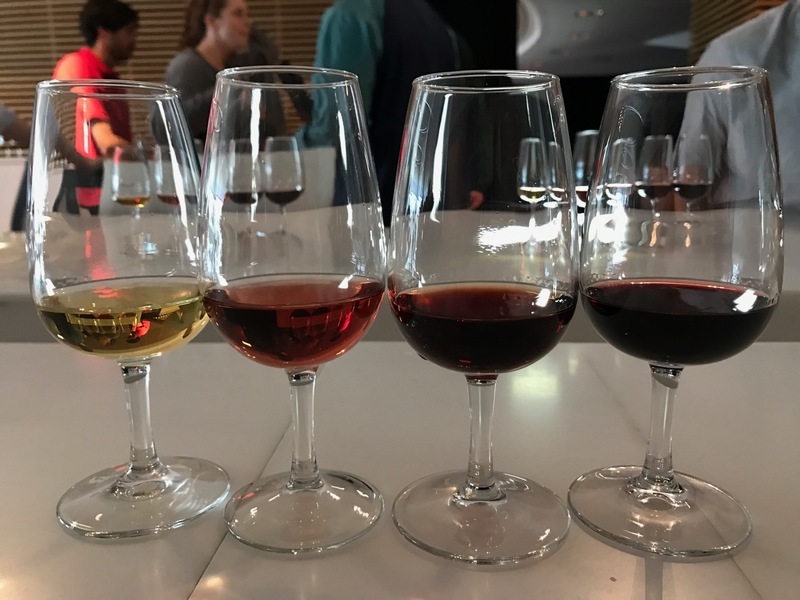 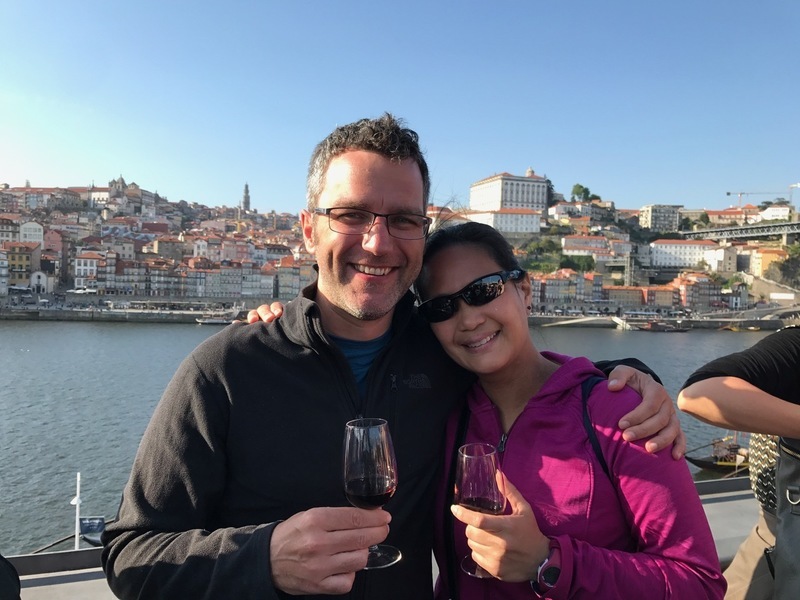 Since we were there for a few days, we also spent a day walking to the coast since we heard the views were really nice.  Unfortunately, by the time we reached the end, a thick fog appeared so we had no view. 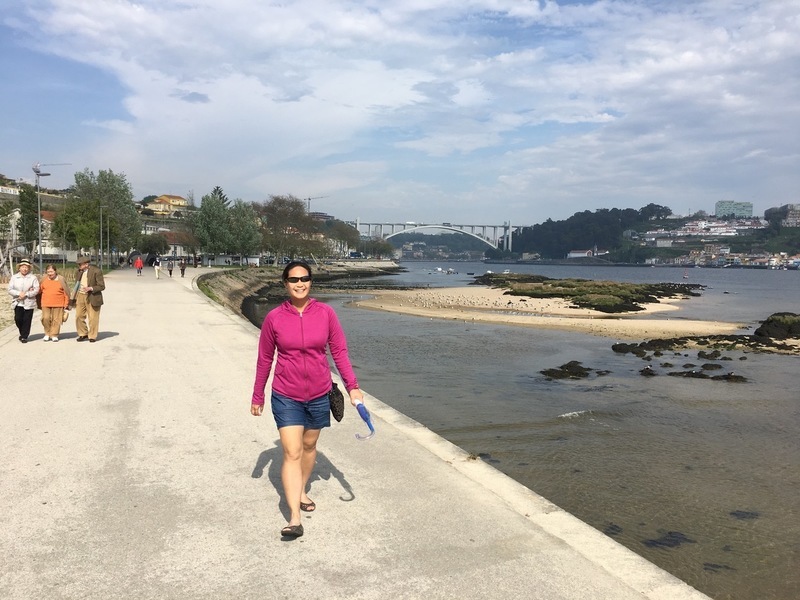 One of our biggest travel highlights is the food experience.  We tried Bacalhau (salted cod), Dobrada Guisada (tripe stew), and Pastel de Nata (these were our favourite!). 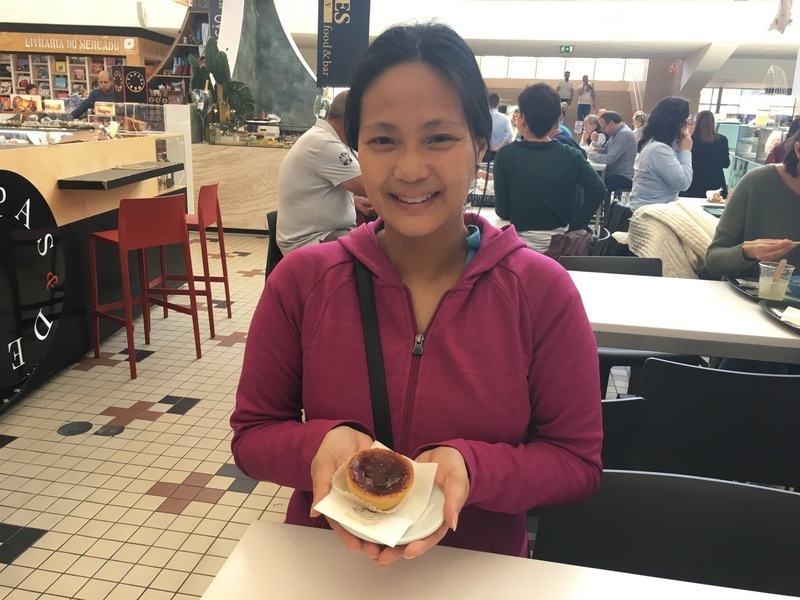 We also read that one of the must-try local specialties is a super sandwich called the Francesinha.
The Francesinha was inspired by the French sandwich, Croque Monsieur: bread, meat, cheese, sauce.  The creator decided to make it even better by adding more meat, an egg, more bread, more meat again, smothered in cheese, drenched in gravy, and placed over a bed of fries.  The whole dish is then put in the oven and served hot. A delicious year's dose of cholesterol :)
We tried 2 of the more "popular" restaurants: Lado B and Cafe Santiago-F.  Both were good, but we had a slight preference for Cafe Santiago as the sauce was a little spicier.  Lado B had a really nice smoked-tofu vegetarian option that was also surprisingly delicious! 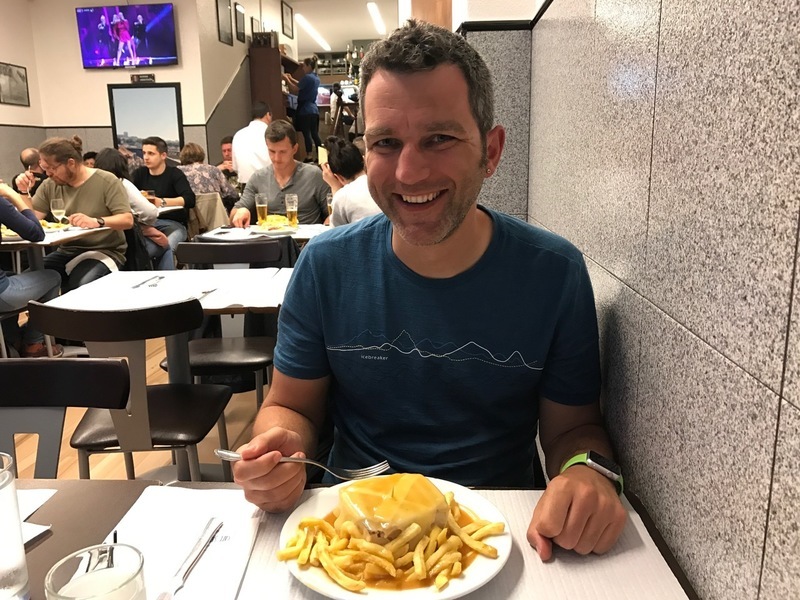 When we first arrived in Porto, we noticed a few people dressed nicely and wearing capes.  We assumed there was some sort of concert or dress rehearsal happening in the area and didn't think much of it.  As the hours/days passed and we explored further around the city, we continued to see more and more people dressed in capes.  We started to think there was a Harry Potter convention in town.
At one point there was a group of them lined up and chanting and on our last day there was a massive parade of them!  We finally found out that this was all part of a university student week called Queima das Fitas.  We think it's supposed to be a fun celebration but a couple of the students seemed upset and were crying (not sure why)!  The parade was interesting to watch for a bit and Dom was tempted to buy a cape too! 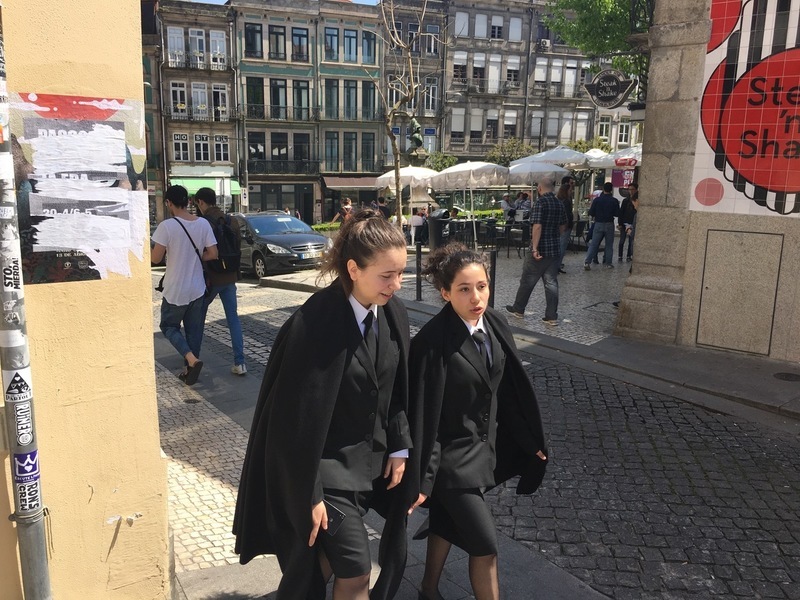 It's been on our wish list since we began our digital nomad lifestyle - working on a cruise ship.
Until recently, the internet on cruise ships was so painfully slow that it was impossible for us to even consider.  Last year, Royal Caribbean came out with a new ship boasting internet speeds fast enough to stream Netflix.  With a little help and convincing from Jen's mom, we decided to book our tickets and put the new ship to the test.
Here is the Quantum of the Seas, the most technologically advanced boat on the seas today: 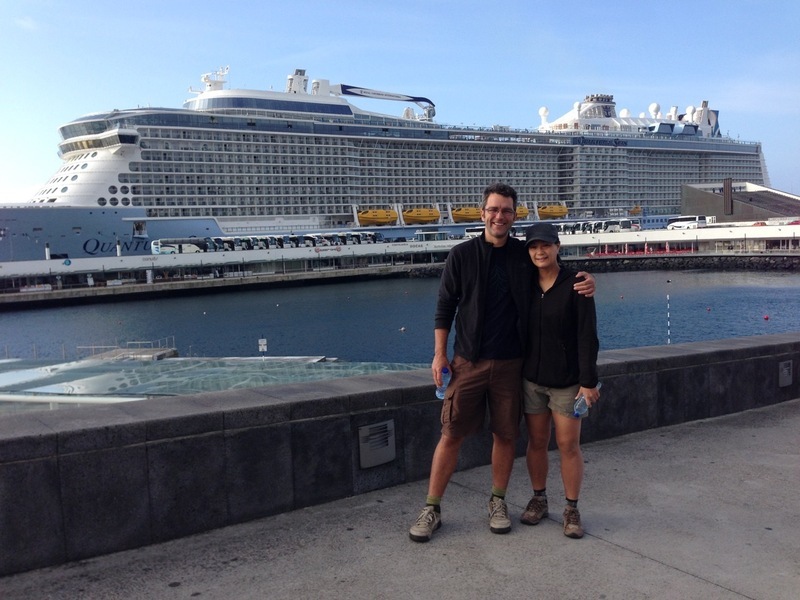 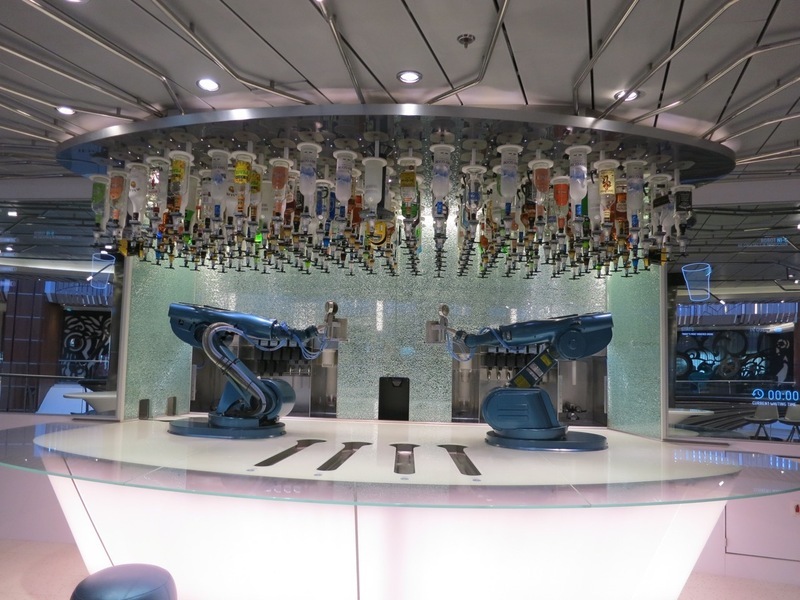 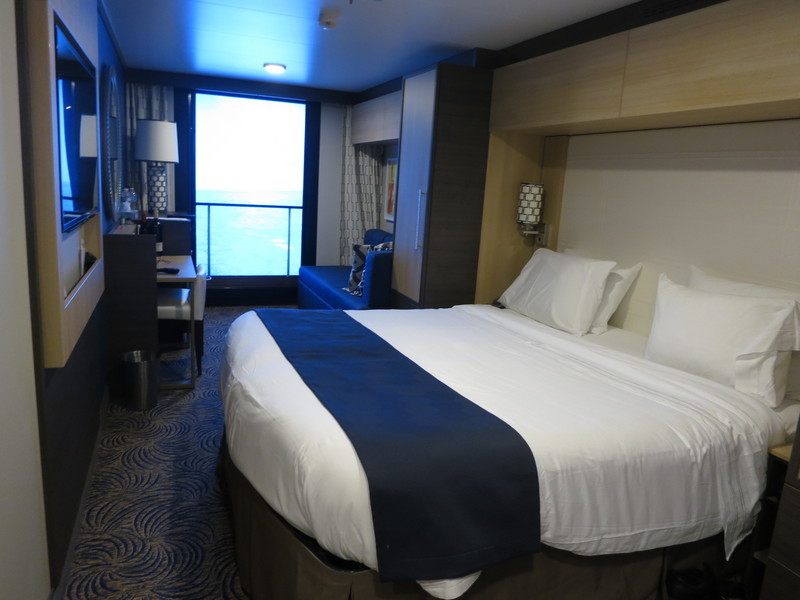 We flew to Newark, NJ and spent the next 11 nights floating toward Barcelona, Spain.

..but hey, wait.. weren't you already just in Spain?
Right.. yes we sure were, but since Jen’s parents and their friends were taking the cruise and celebrating their 65th birthdays, we decided to join in on the fun :)

Dom had done 1 cruise in the past and found it fairly... boring.  Taking a cruise while working at the same time was quite a bit more hectic with trying to juggle everything in around work hours...
Activities: Bumper cars, ping pong, napkin folding class, iFly, FlowRider, volleyball, the shows (Mamma Mia, the Beatlemaniacs, Star Water, Sonic Odyssey, and Claire Vinkesteijn). 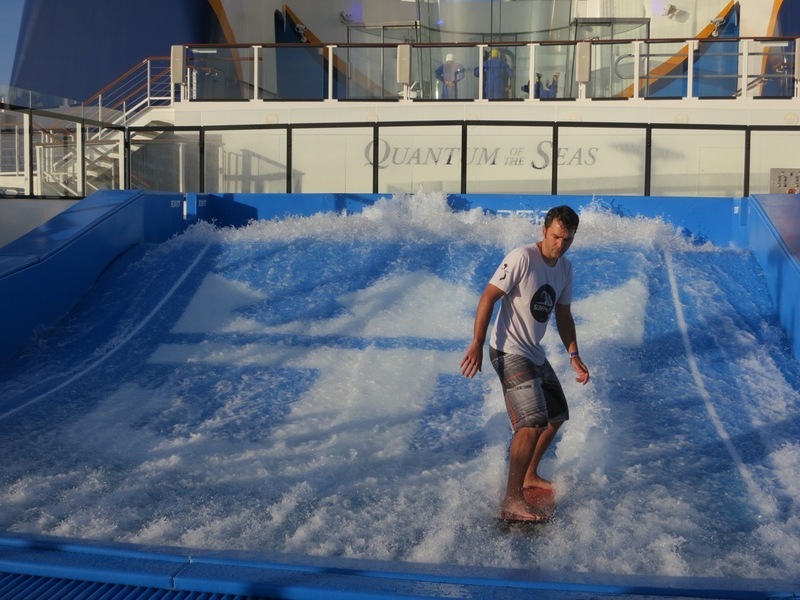 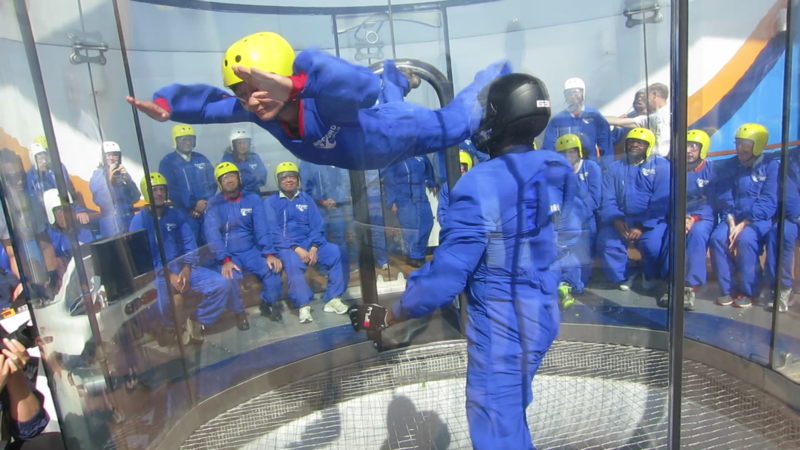 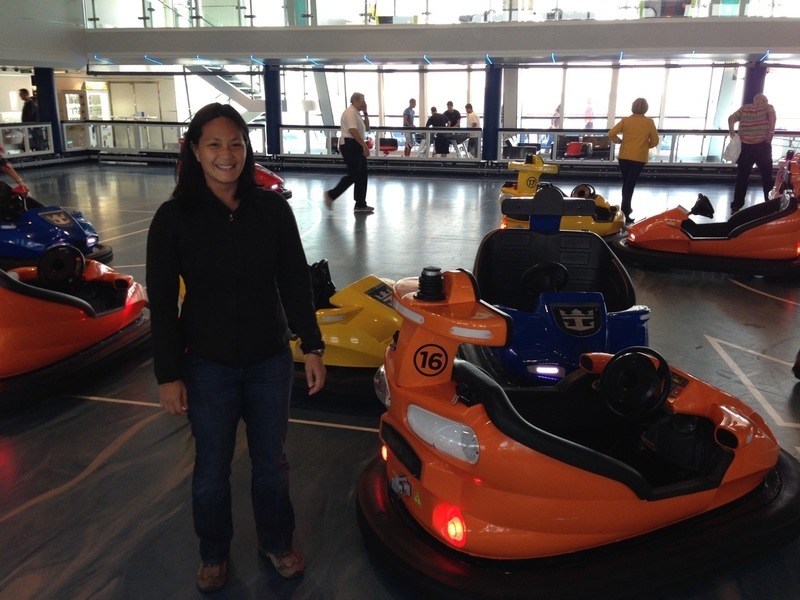 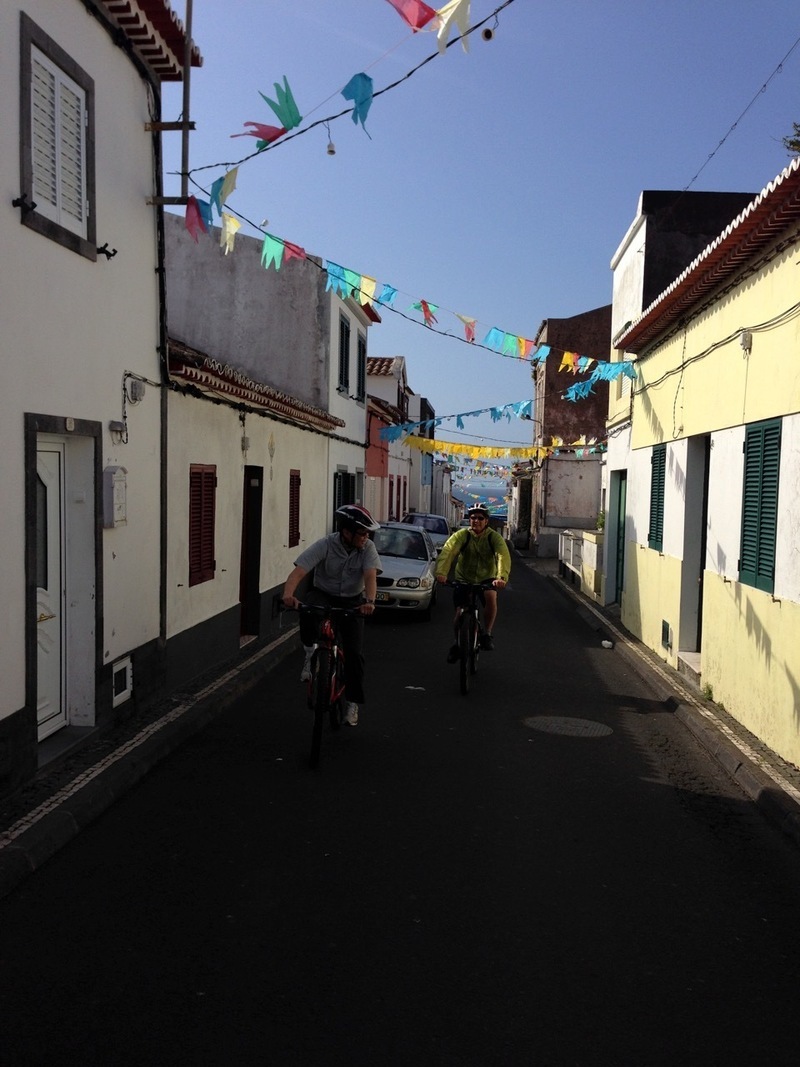 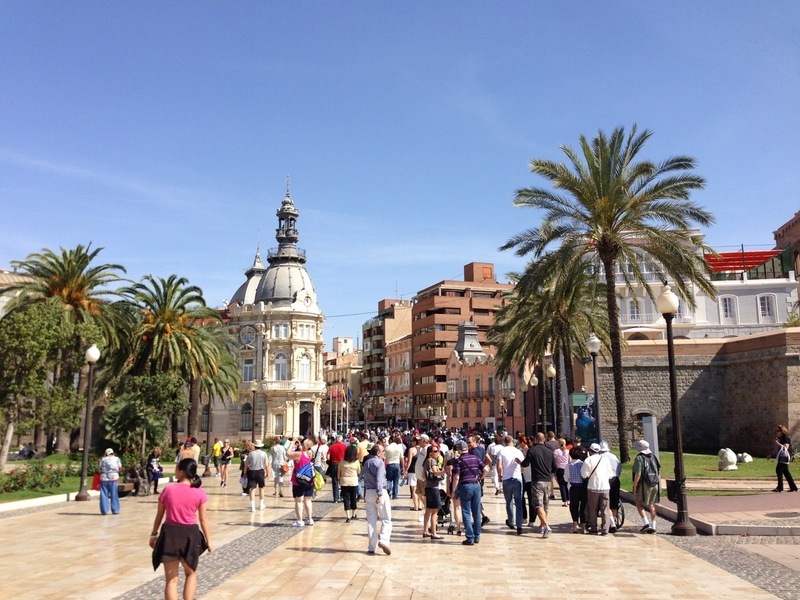 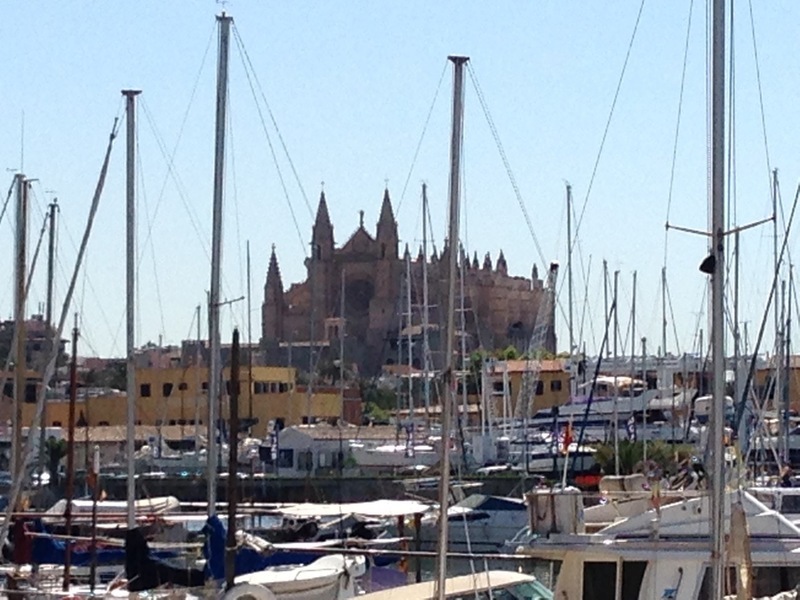 And lastly all of the food, drinks, and socializing 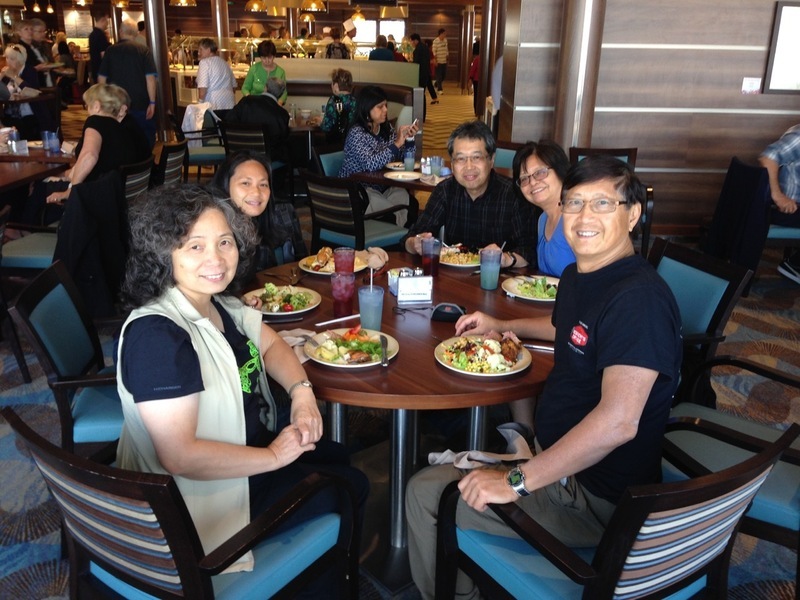 It made for quite the busy trip, but overall we really enjoyed ourselves.
So, did the internet speeds stand up to the challenge?  Sadly, no... it seems the technology is still new and they've still got a LOT of bugs to work out of their system.  The internet wasn't anywhere close to what they claim - we think they must have tested Netflix when there was only 1 person on the ship!.  If you just need to surf the internet and you have patience, it is much better in comparison to other cruise ships out there.  However don't expect to be able to do any kind of streaming or have decent Skype calls.. we got lucky once or twice and managed to connect our calls, but often times we could barely even sign in. 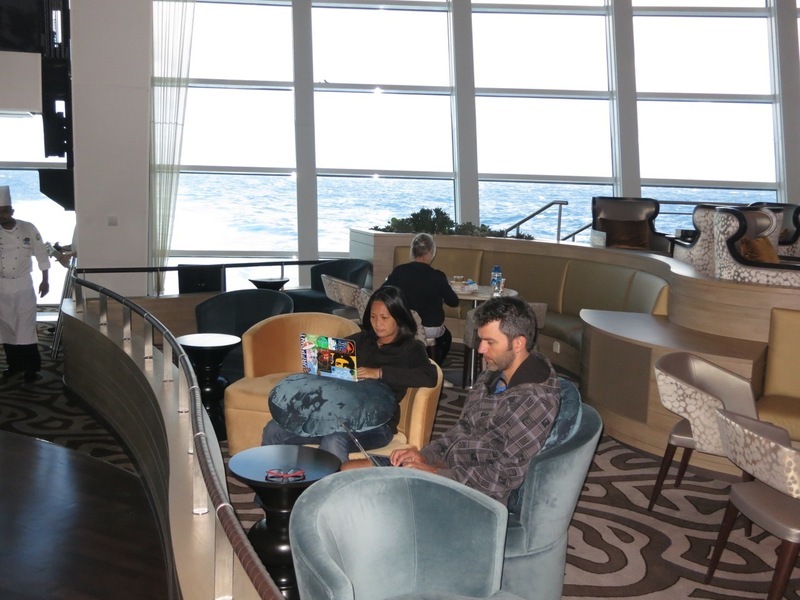