Most people know Jordan and Petra because of the movie "Indiana Jones and the Last Crusade", where Indiana and his father go in search of the Holy Grail.  It was a cool movie, but the only real resemblance to Petra is the siq (canyon) into the city, the carved entrance to the treasury, and the fact that Petra lies in the Christian holy land… the rest is pure fiction.

Overall, the city of Petra is really impressive and definitely met our New Wonder of the World expectations.  We stayed in Wadi Musa (the city at the entrance of Petra) and decided to spend two days exploring the ancient city.  The entrance fee for Petra is by far the most expensive attraction we've been to - a 1 day ticket is 50 JOD ($75 CAD)!!  Fortunately the second day only costs an additional 5 JOD ($7.50 CAD). 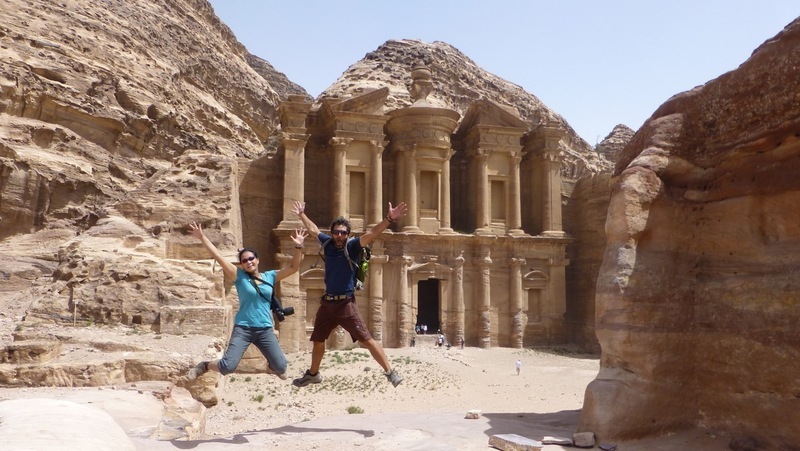 Petra's history begins as far back as 312BC when it was a capital city and major caravan trade centre to the Nabateaen people.  As with many major sites in the holy land, the walls of Petra had seen many habitants and rulers from many different origins, cultures and religions including Greeks, Romans, Egyptians, Syrians etc.  The result was a magnificent city where the architecture and carvings took on an interesting blend from several different cultural influences.

At the Petra gates, you can choose to walk or horse-ride (it's included in the price of the ticket) to the entrance of the canyon.  We planned to walk to the complex known as "The Monastery", located atop a mountain 8km away from the gate, allowing us to escape the crowds and get a quick overview of the major sites along the way. 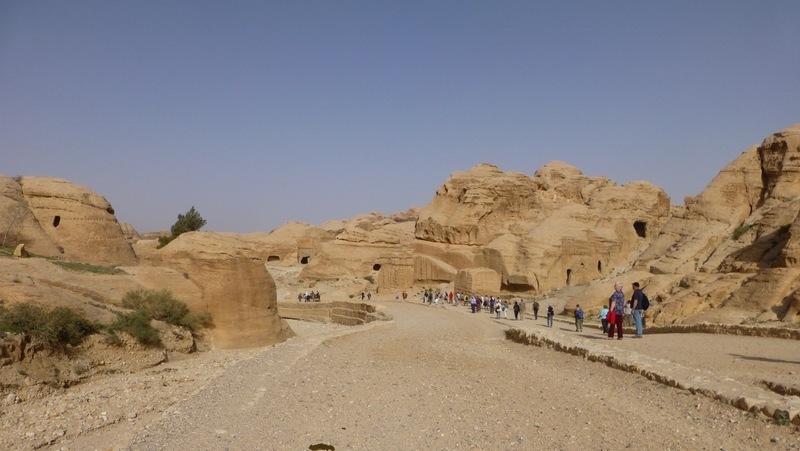 We arrived at the entrance of the siq (canyon) that leads to the Treasury.  We initially figured the movies exaggerate this canyon and that it only actually spanned a hundred meters or so.. but it actually turned out to be 1.2km long and very scenic.  The entrance to the canyon was once decorated with large arches and, if you know where to look (or in our case, if you listen to other peoples' guides), you can see remnants of beautiful carvings that used to span all along the canyon walls.  You can also see the remains of a water system (canals) running along the entire canyon to bring water to the city.  Much of Petra has been covered or destroyed by erosion, floods, and earthquakes, but we can just imagine how amazing it would have been to walk through the decorated canyon back in its glory days! 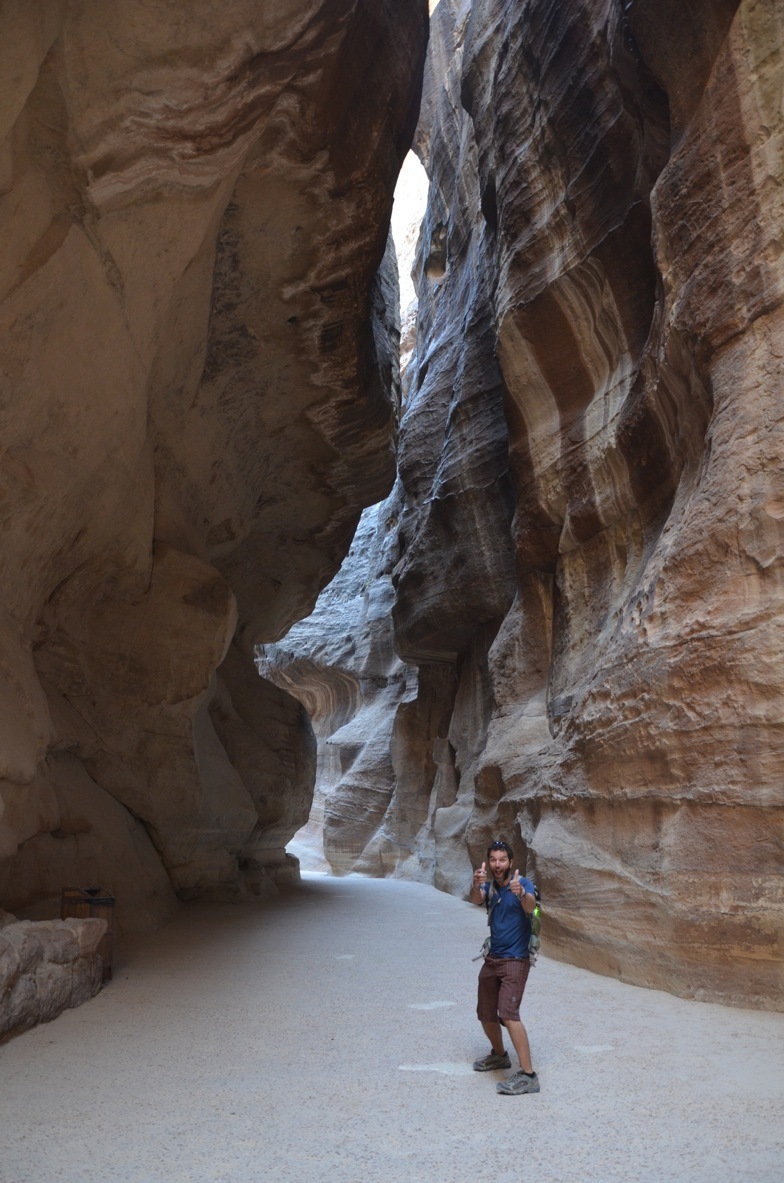 At the end of the siq, the Indiana Jones million-dollar-view of the Treasury unfolds… 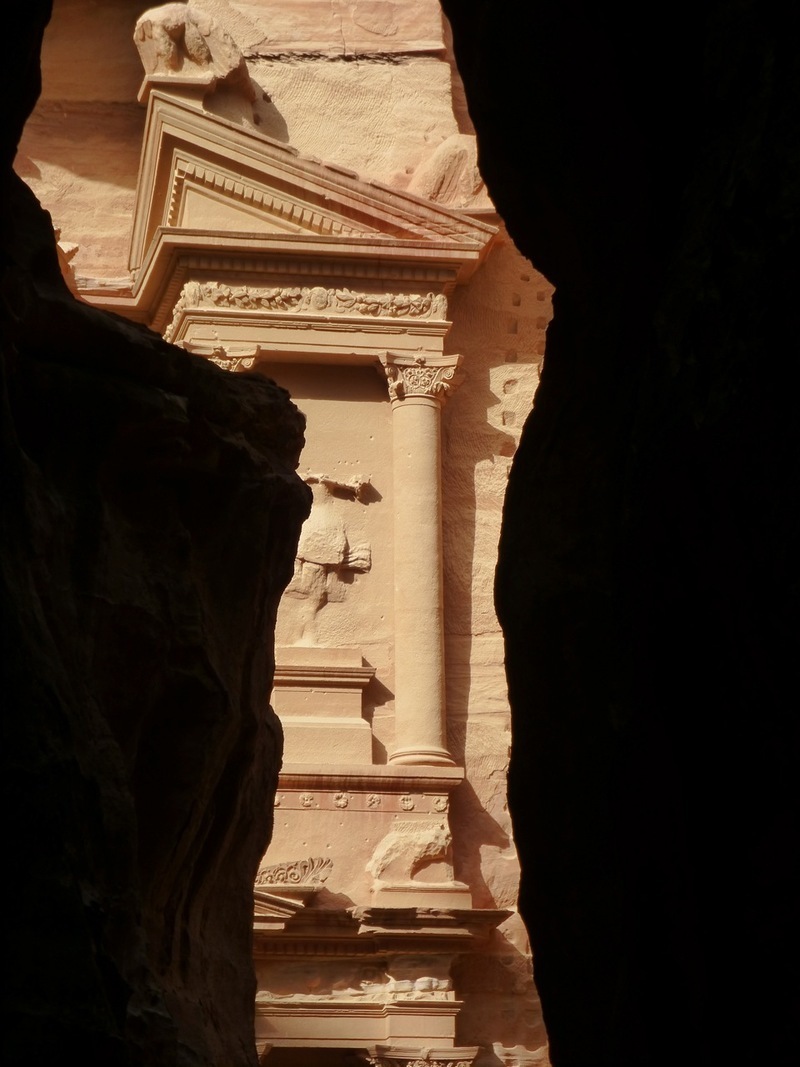 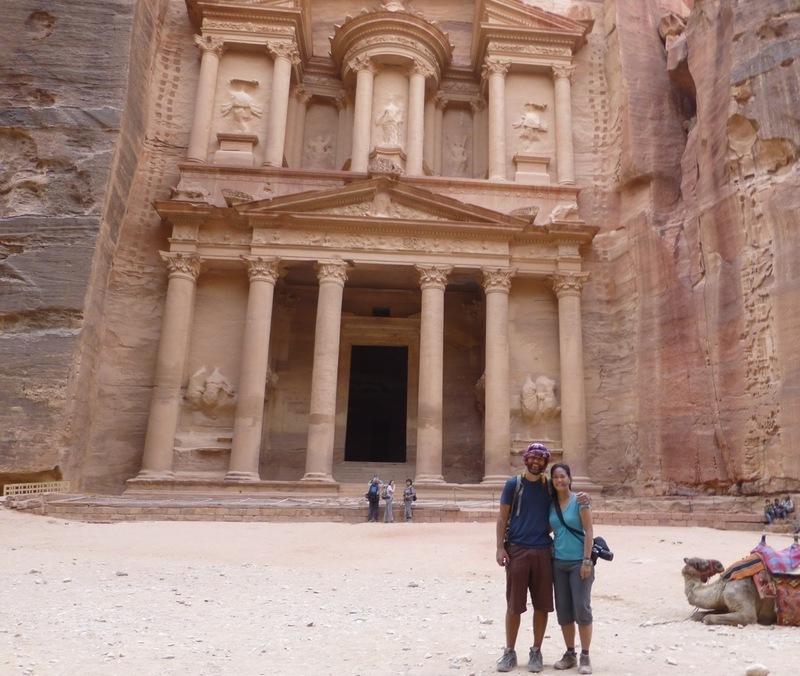 We admired the treasury for a couple of minutes (you don't need more as it's just a facade to a small room - there is no intricate complex inside like in Indiana Jones!!), then we continued through the valley where the grandeur of Petra's city begins reveal iteself. 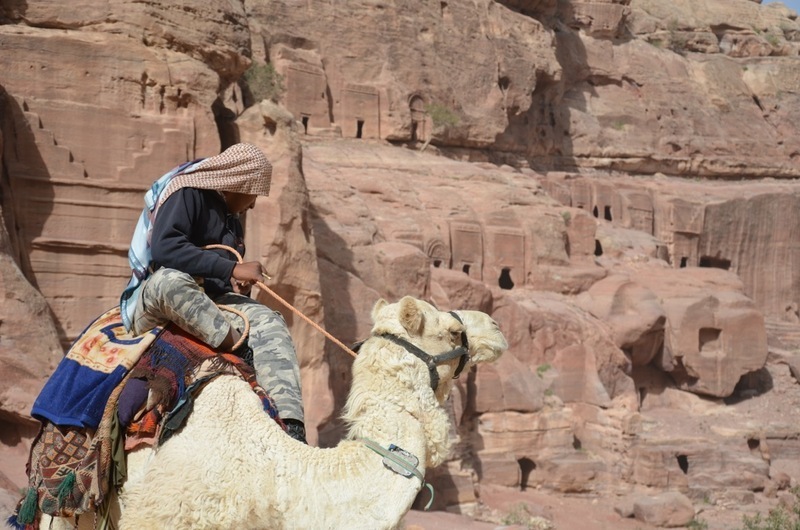 We bypassed most of the city and started to make our way up the 800 steps to the Monastery before the sun was in full force. 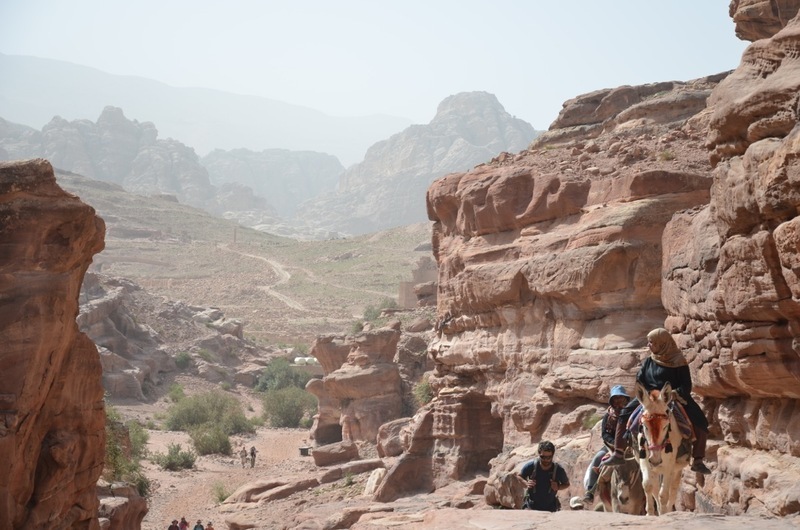 After a few hours of walking, we arrived at the Monastery - it's really similar to the Treasury, but bigger.  We decided to sit and relax while enjoying the beautiful views surrounding us. 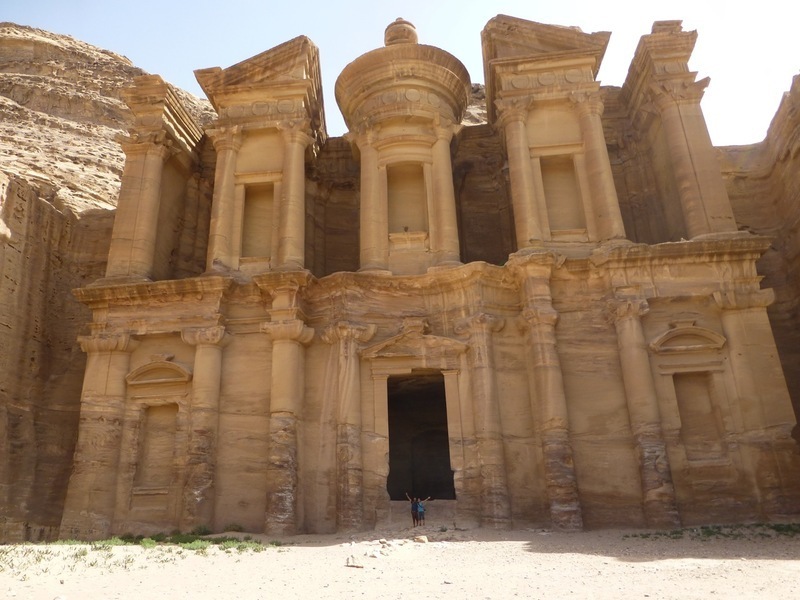 We headed back down to check out the city in more detail.  All along the way, you see so many holes carved right into the rock, where people actually lived… the number of them was impressive, making it easy to see that Petra was a very large and important city back in the day. 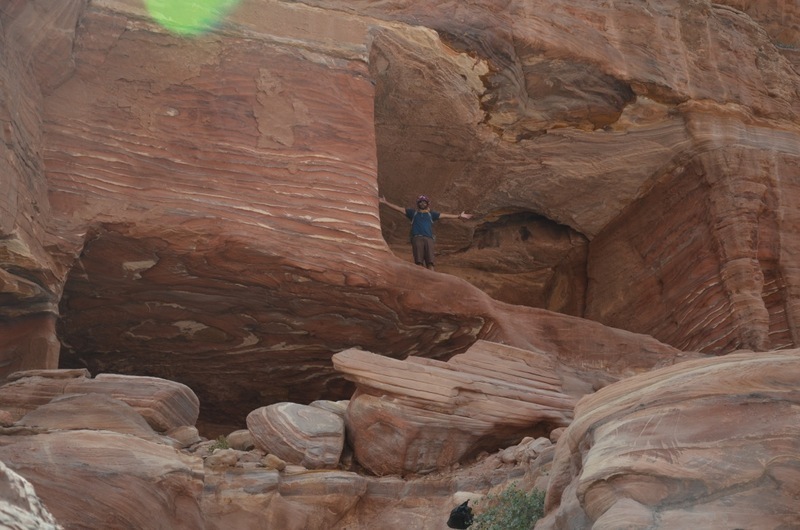 We also stopped to explore some other ornately carved tombs and temples. 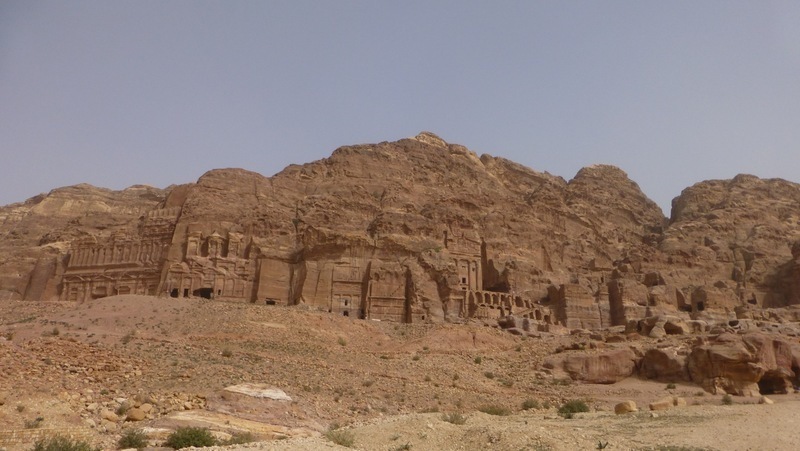 On our second day, we checked out the High Place of Sacrifice - their most sacred open-air altar where they performed rituals by killing animals.  You can see some ruins of the temple and obelisks, but the nicest part is the view of the surrounding hills. 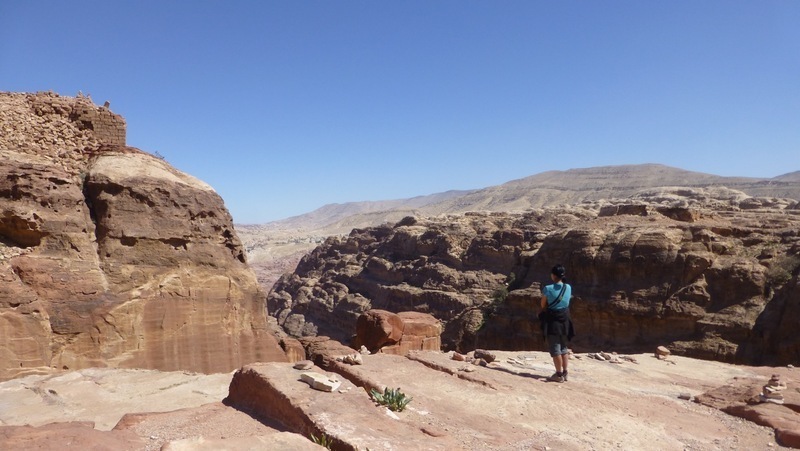 Just when we thought we had seen it all, we took the back way down only to discover even more buildings/carvings… there were just so many, we were quite impressed! 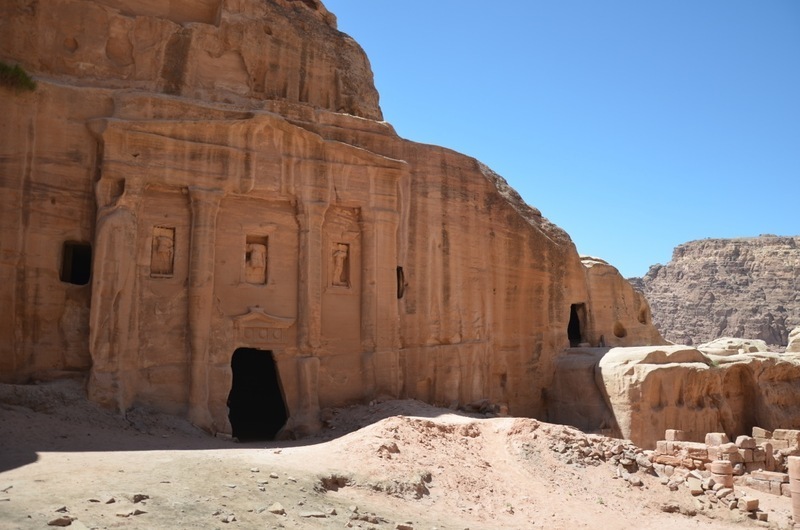 We took a wrong turn and ended up at the top of the Roman Theatre.  It's normally blocked off at the bottom so people can't enter, but we were stuck in there and had to go through it and sneak through the fence to get out. 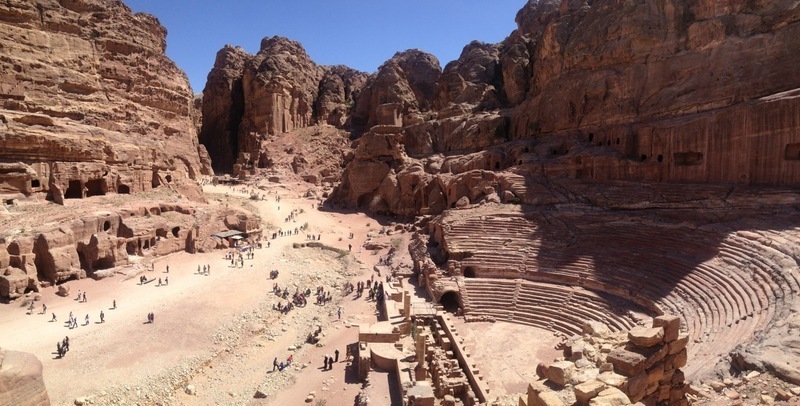 Since we still didn't have enough of Petra, we went a third time!  This time we walked through the siq to the Treasury at night, guided only by moonlight and some strategically placed candles along the path.  At the Treasury, we were served tea and they entertained us with a traditional Bedouin music presentation.  It wasn't particularly incredible (the crowds of noisy tourists really took away from the mystical / magical feeling of it all), but it was still a unique and enjoyable way to experience the site. 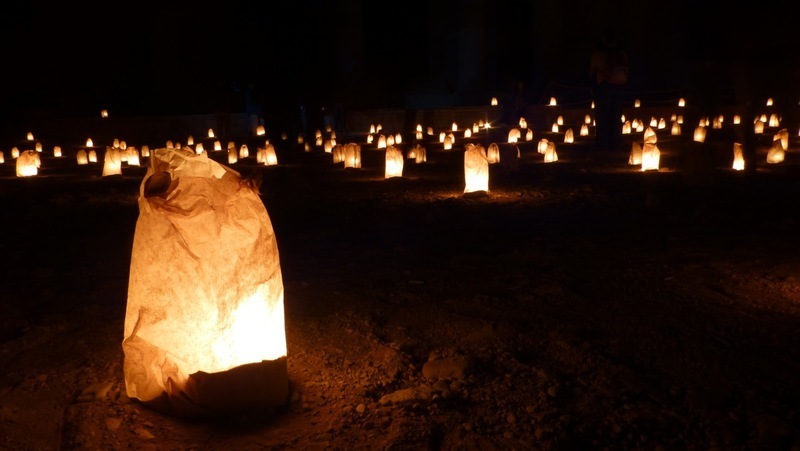