From Guanshan, we took a local train to Taitung to catch a TRA train to Kaohsiung, the second largest city in Taiwan.

Our first stop was "Pier 2", a unique pier dedicated to public art.  Here you could see several murals, statues, and other art installations. 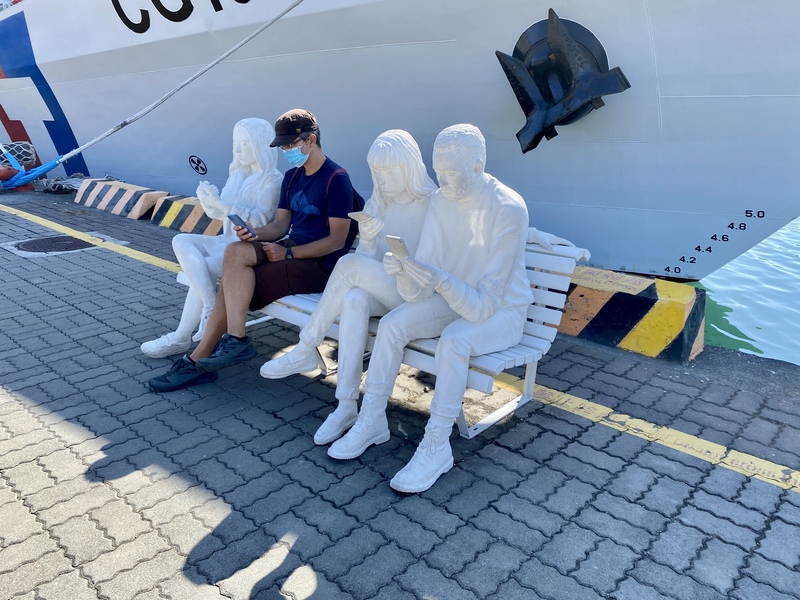 Within Pier 2, we decided to stop at a local restaurant called Sunny Hills to taste Taiwan's famous Pineapple Cakes. To our surprise, the restaurant provided a free pineapple cake and a cup of tea.. very tasty! 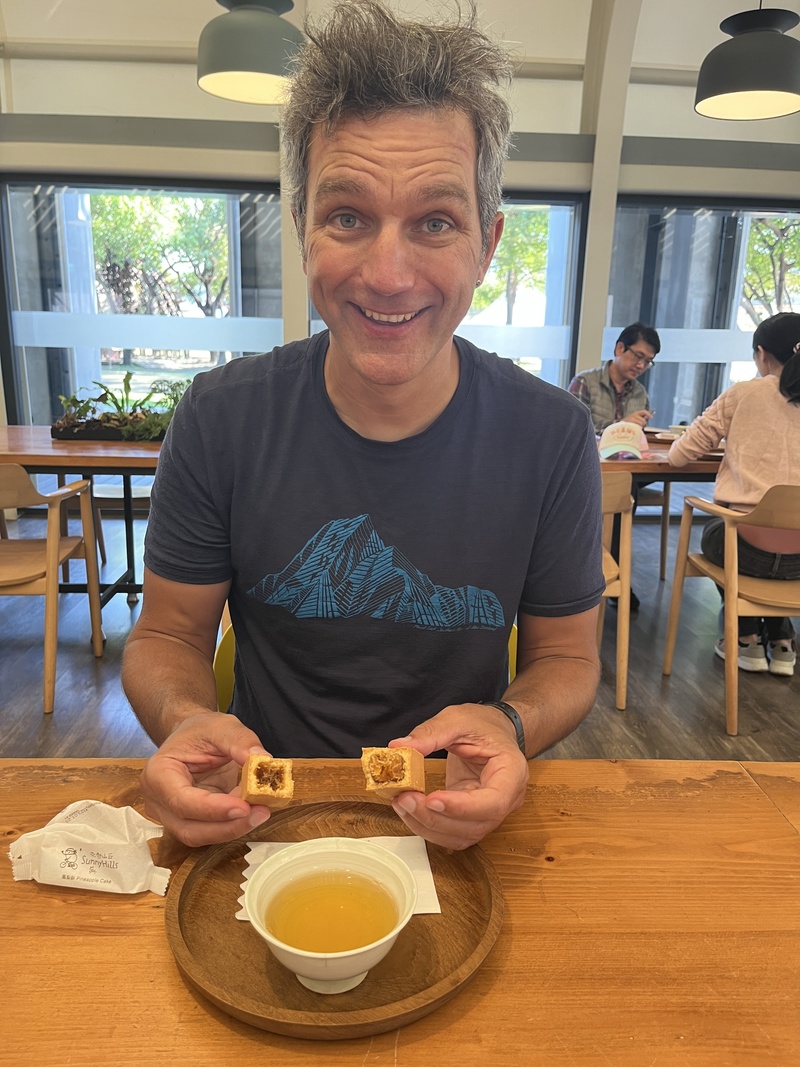 From Pier 2, we walked North along the Love River which flows through the city and has some crazy jumping fish that you can catch a glimpse of on occasion.  We detoured off of the river to visit Lotus pond (lake), which is home to a few unique temples.
The Dragon and Tiger Pagodas were closed, but we had a nice view of them from the outside.

Luckily, the Spring and Autumn Pavilions were still open, so we entered the mouth of the Chinese dragon, went up and down the undulating body to see murals depicting various (interesting) characters/stories, and finally exited from the dragon's butt. 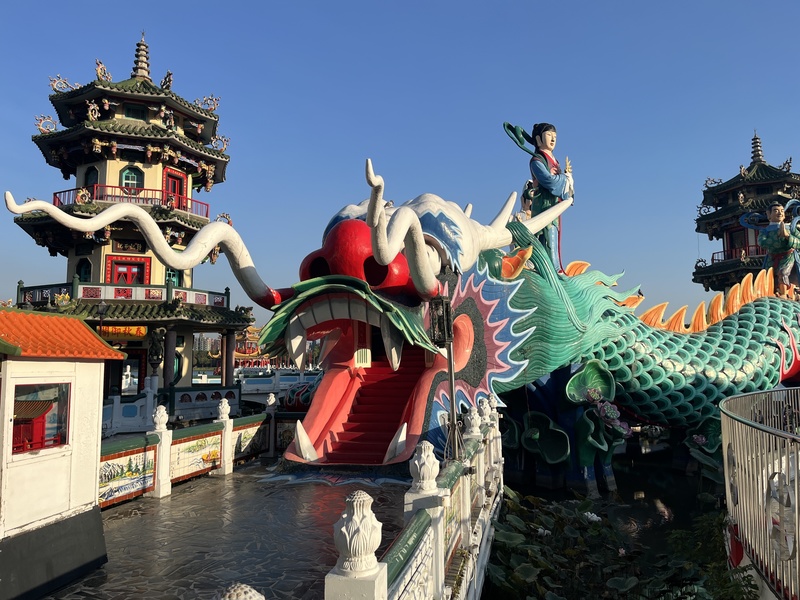 The last water temple was the Zuoying Yuandi Temple.  At this temple, there was a section where you could toss a coin toward a bell in a hole and if you got it in, different characters would play a drum for good luck and future wishes.  Dom gave it a try and hit the bell, but instead of dropping into the hole, it bounced back past his shoulder and into the garbage bin.. not sure what that signifies about his future luck! 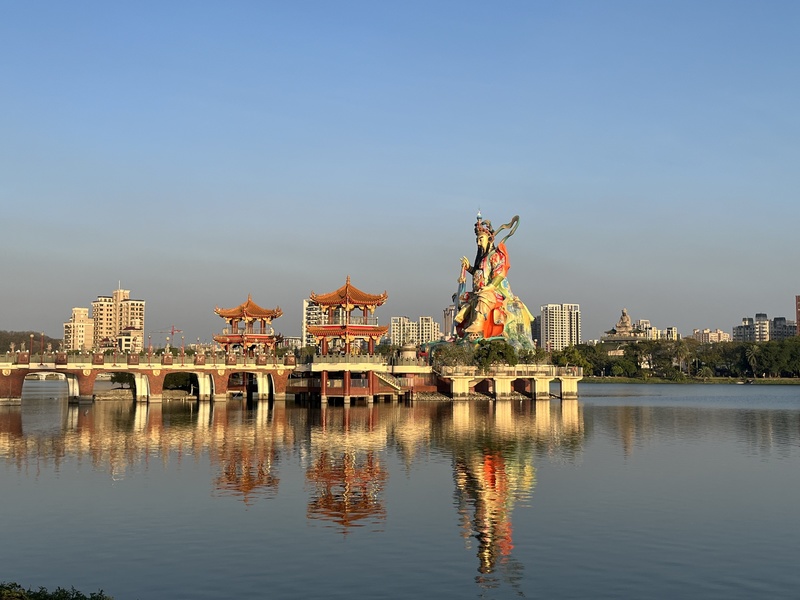 We continued around the lake to visit the Confucius temple and reach the East side of the lake just in time for the sunset. 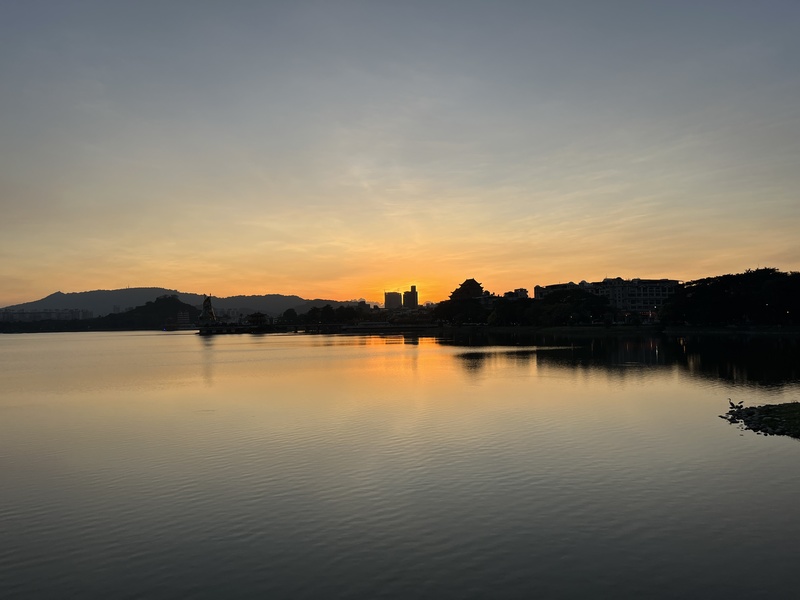 On Day 2, we went to Weiwuying Street Art Village, a neighbourhood near the Weiwuying Station that has hosted a number of street art festivals over the past years. It was quite impressive to see the number of large apartment buildings covered with so many fun and interesting street art pieces. 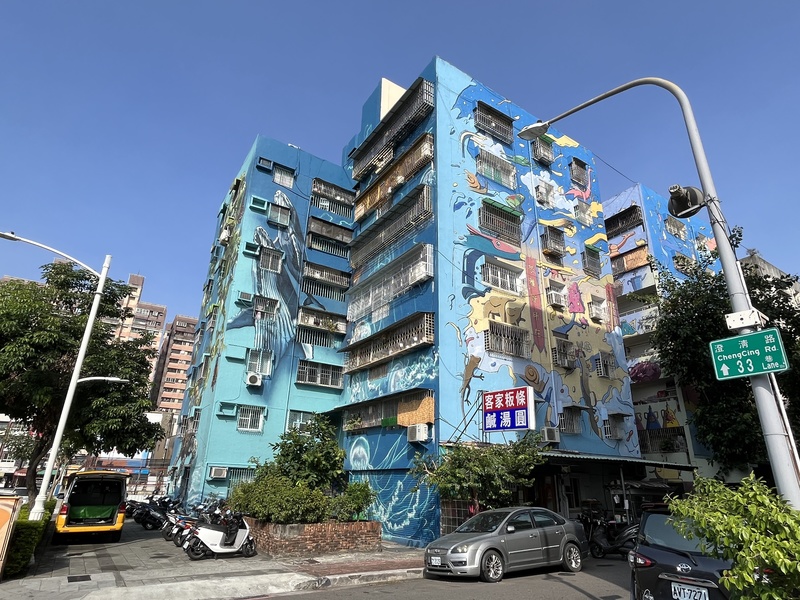 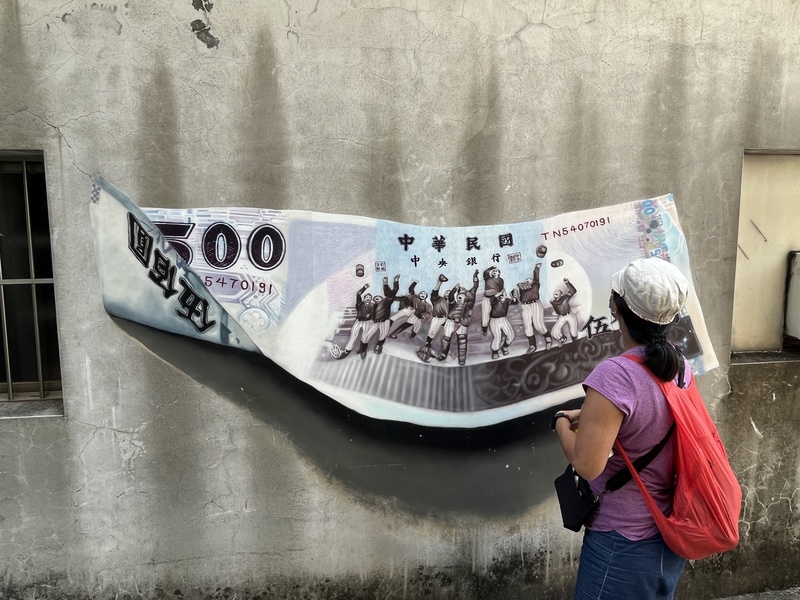 From the Weiwuying, we decided to stop by a Costco to see what kinds of "Taiwanese" products they had and to buy a Costco-sized box of Taiwanese pineapple cakes. 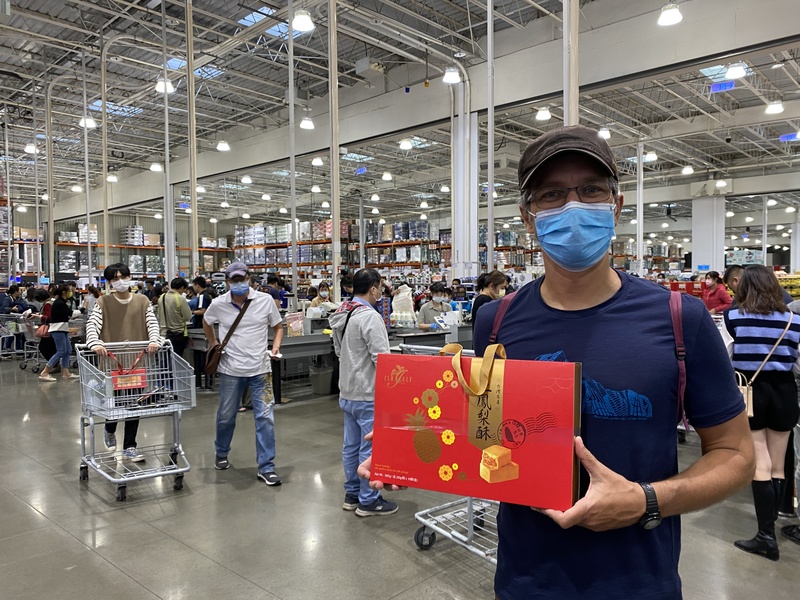 We finished the day at Sanfeng Temple, known for their many strings of lanterns that are lit up at night. 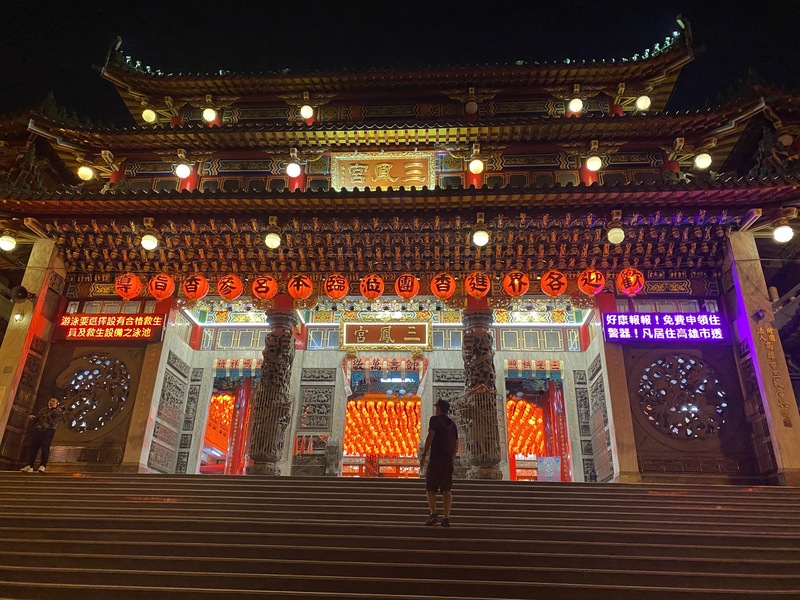 Food was also a big part of our 2 days here.
At the Ruifeng Night Market, we tried egg&cheese cake, a crunchy pancake with Mexican flavours, and Scallion Pancakes. 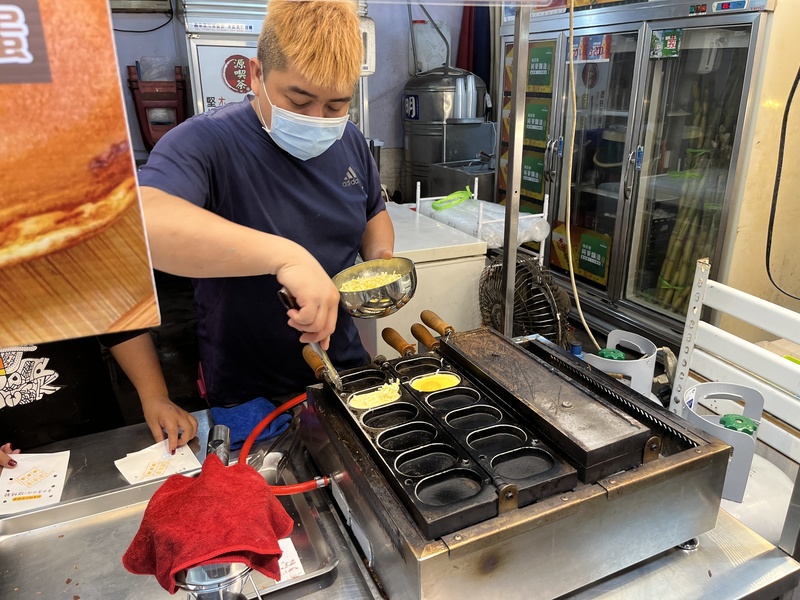 Near our hotel, we also discovered delicious cheap Taiwanese breakfasts at Xing Long Ju.  We tried big soup dumplings (a fluffier style than what we'd had before), an interesting soybean-based soup, and an egg sandwich made with pastry instead of bread.  Dom especially loved the half-sweet soy-milk that they made there. 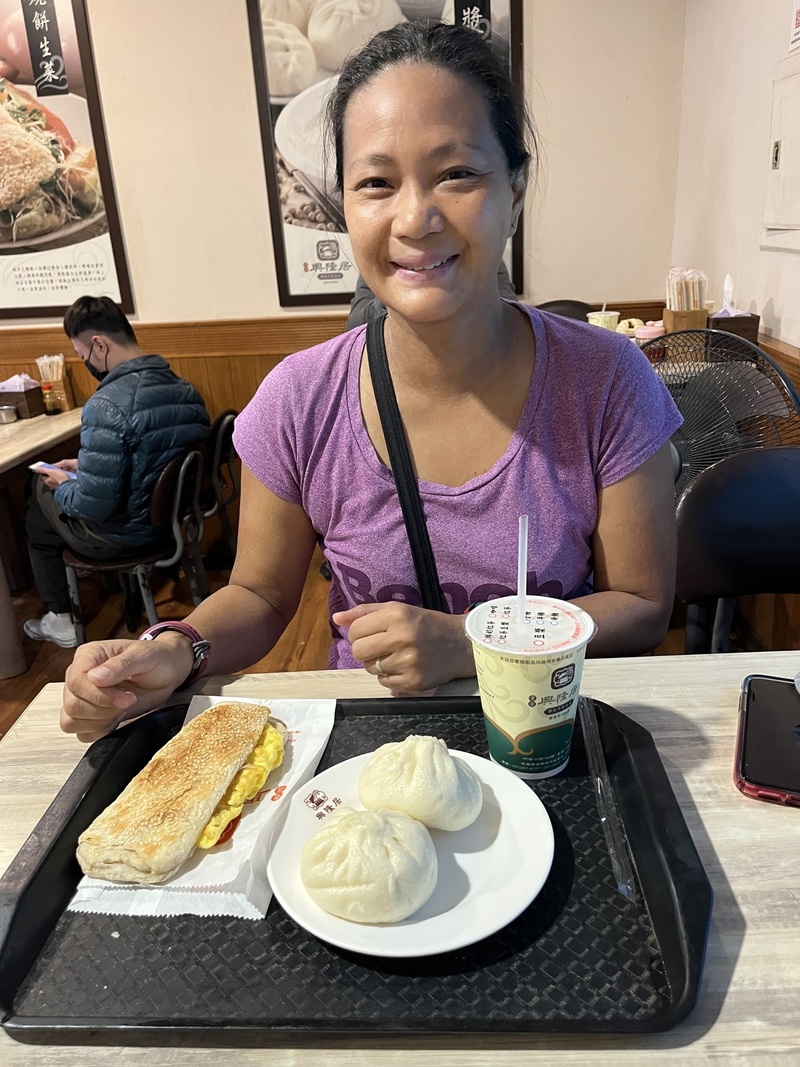 For dinner, our favourite food was the Taiwanese spring rolls from Roll Overlord.  It was a bit far from our hotel, but we went out of our way to go there every day that we were in Kaohsiung.  It was a really delicious healthy veggie dish, to help balance out all of the greasy night market food we had been eating 😂! 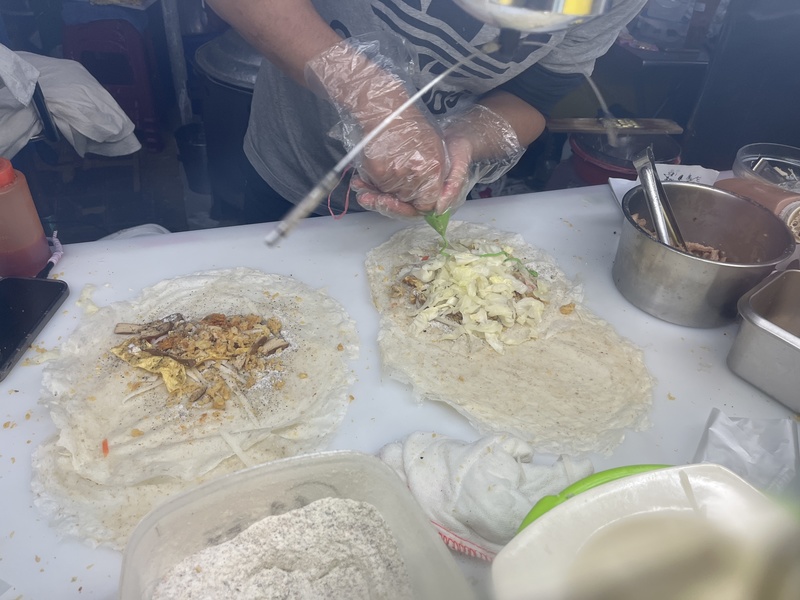