We came to Hualien because it was the starting point of our Giant East Coast cycle tour, but we also wanted to arrive here a couple of days early to taste the local foods and see Avatar 2 before starting the bike trip.

Hualien is a nice medium-sized city - no super touristy sites (other than Taroko National park), but plenty of interesting streets and areas to stroll through. Our main goal was to eat typical Taiwanese food from this region, and we were not disappointed.

The first thing we wanted to try was a fried egg and scallion pancake (Cong You Bing - 40 TWD, ~$1.75 cad)) that Jen's mom told us about. There seemed to be 2 competing stalls near our B&B - the Yellow Car and Blue Car.. of course, we had to try them both.  Both reportedly have hour-long lineups but we decided to try going at an off-hour (ie. 3pm) and managed to avoid the crowds.  Both were really delicious, but overall, we liked the blue car better as they make and serve each individual order one at a time so the pancake is hot and super crispy when you eat it.  The yellow car, in comparison, seemed to be making and serving the pancakes out in batches - probably faster for them to process the line this way during busy times, but it did result in our pancake being lukewarm and less crispy by the time we got it.  Besides the fact that everything is deep fried, what really makes these pancakes so good is that the egg yolk is still hot and runny.. it's then surrounded by a bit of delicious brown sauce and crispy onion-flavoured dough.. mmmmmm! 🤤 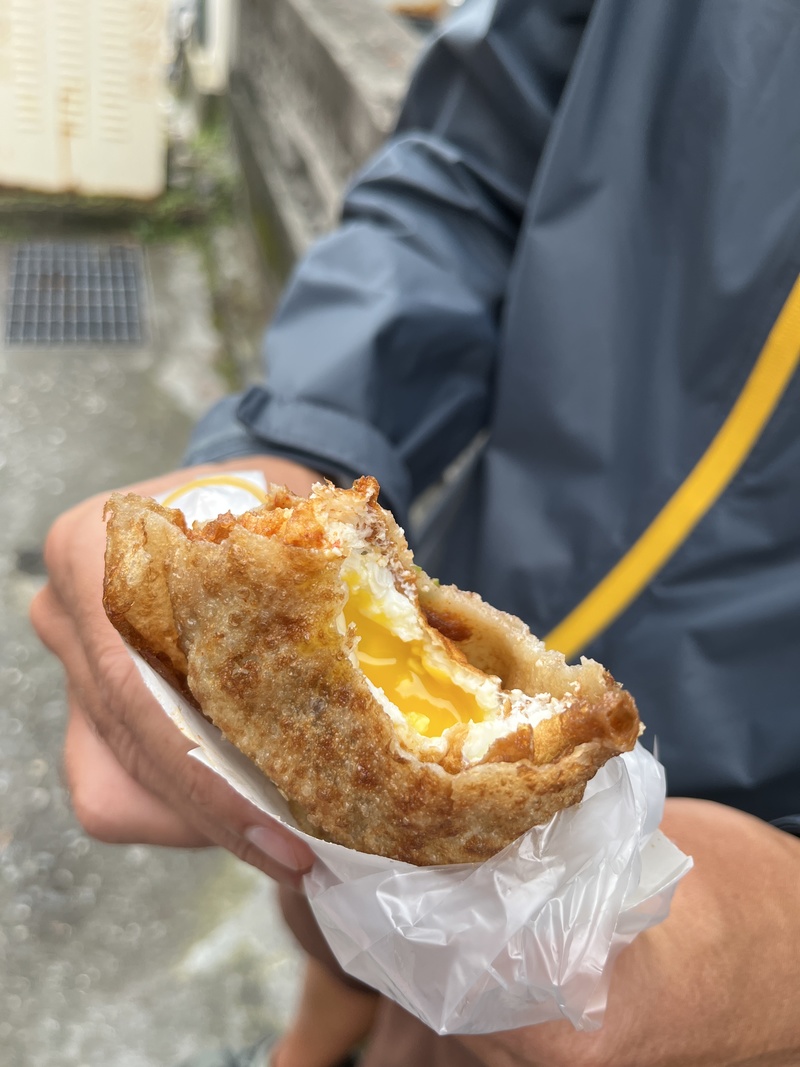 Most of the rest of our delicious food experiences were at the Dongdamen Night Market, where we found a great variety of food stalls to try. 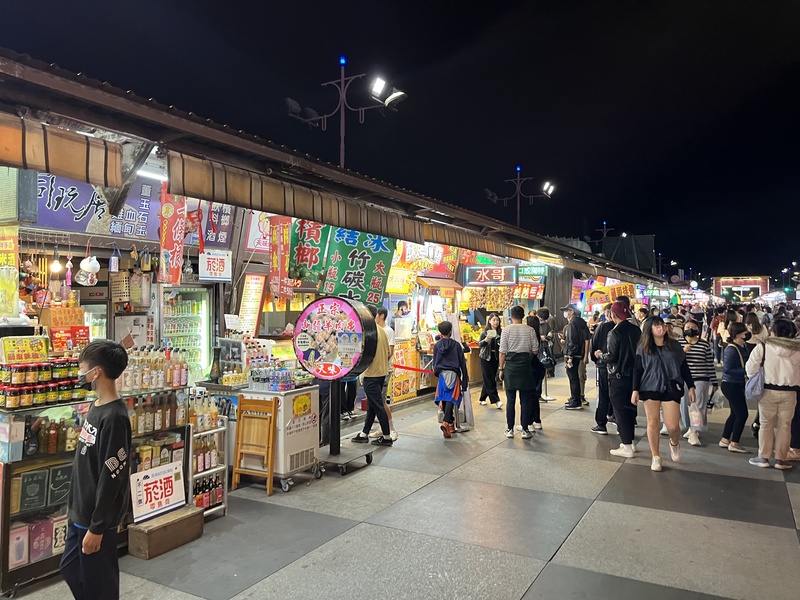 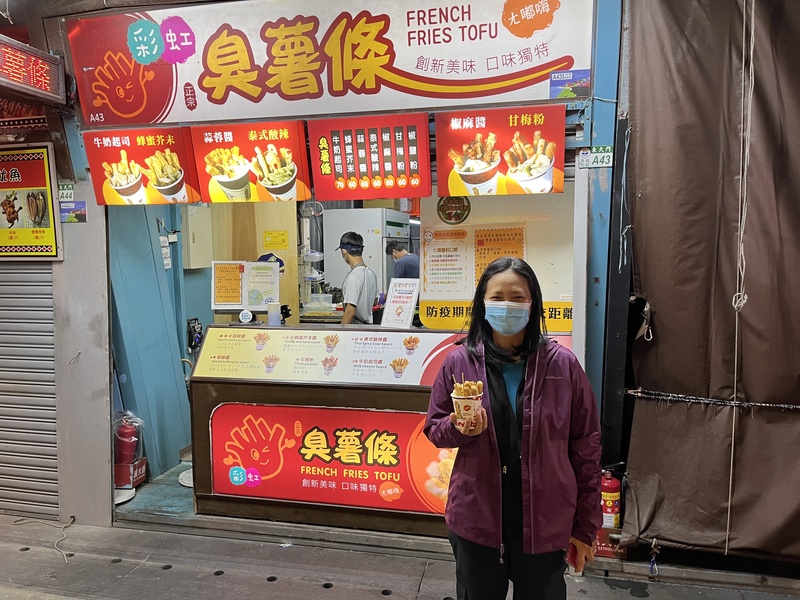 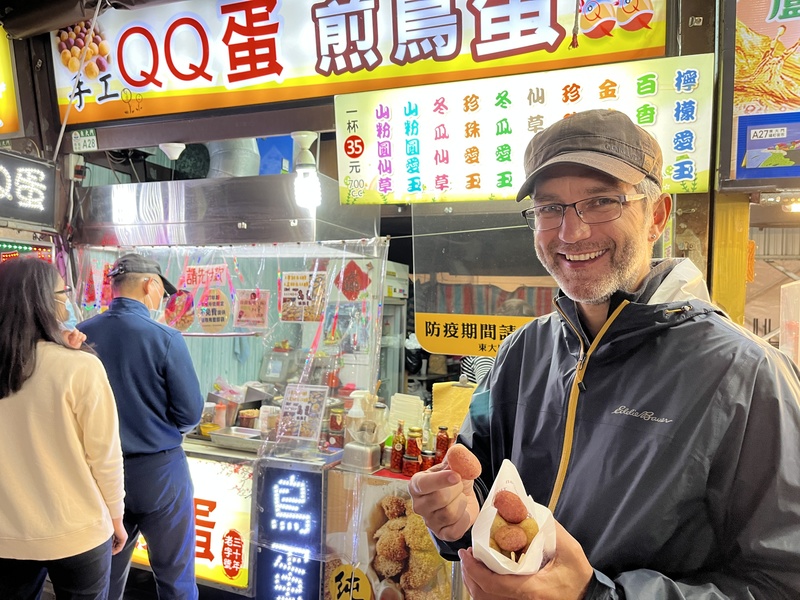 Roasted Corn (~$8cad - the most expensive piece of corn we’ve ever eaten!) 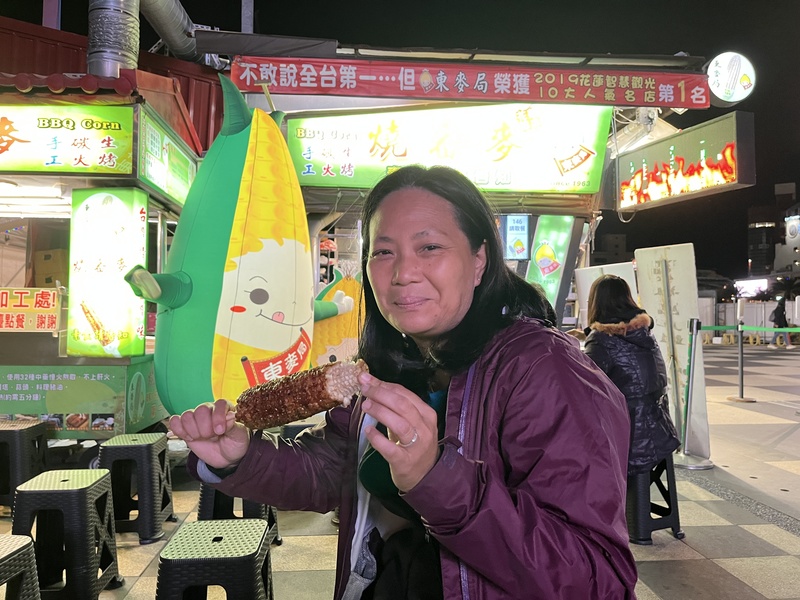 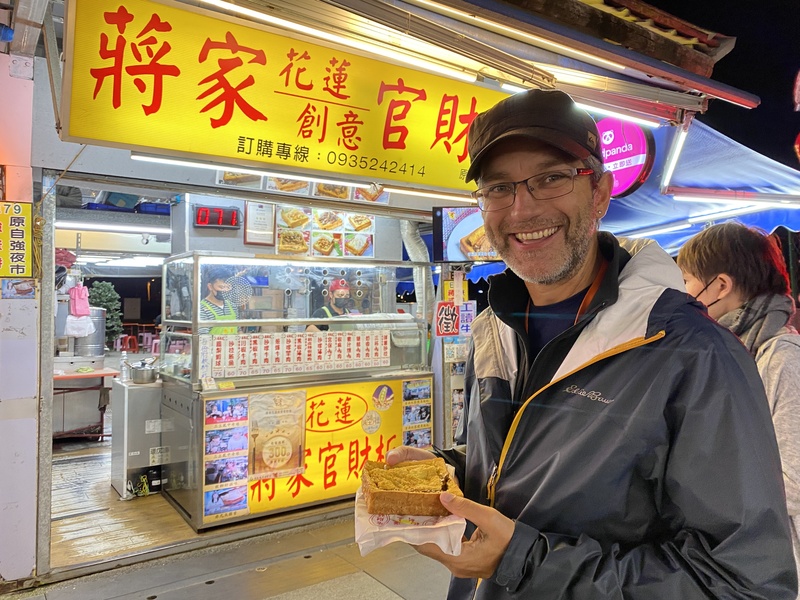 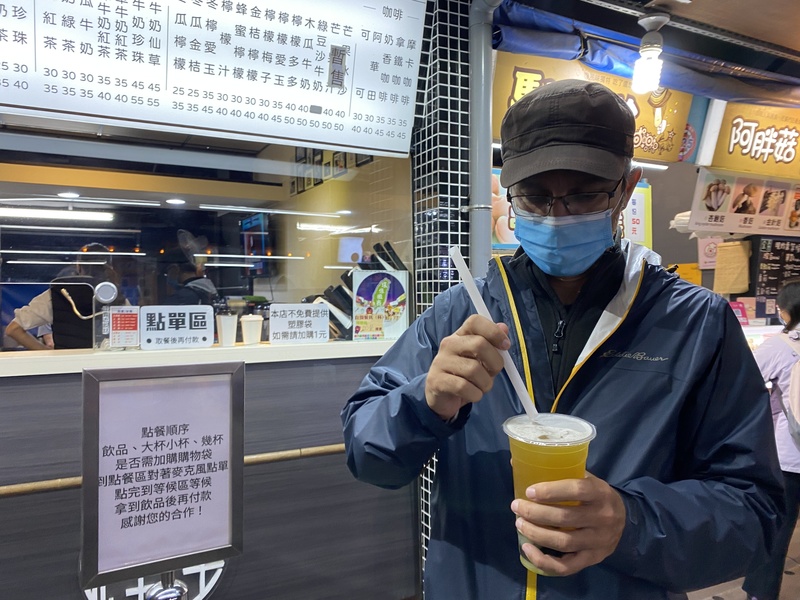 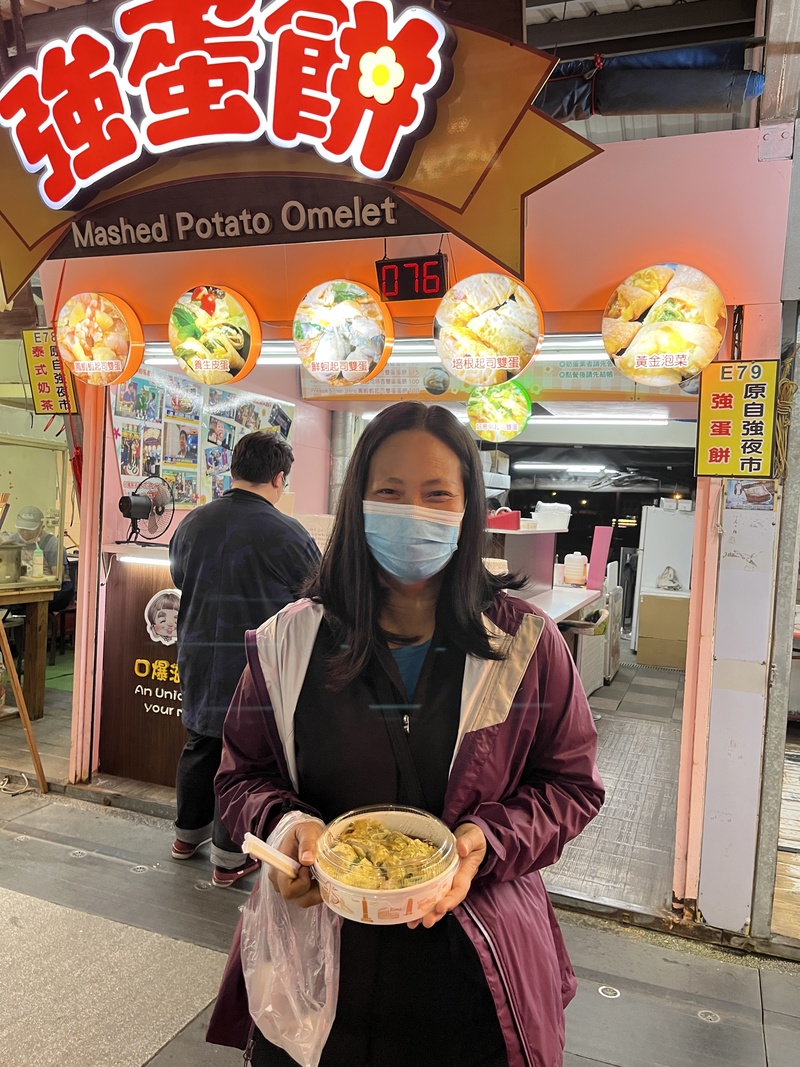 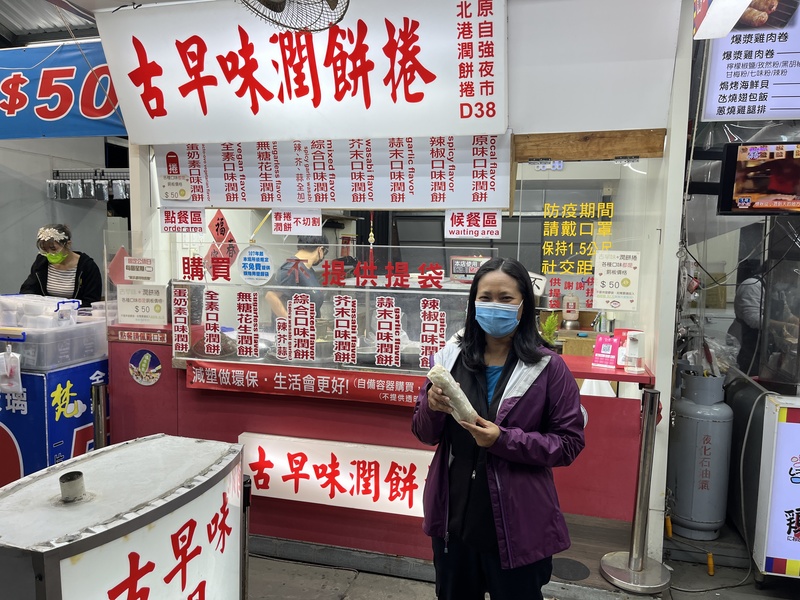 Our very lovely accommodation, Alien B&B, usually served a fairly typical "western-style" breakfast, but they offered to bring us a "typical" Taiwanese breakfast to try.  It included Turnip Cake, Omelette Crepe, Fried-Dough Sandwich (Shaobing Youtian) and warm Soy Milk.  It was so much food (especially since we aren't really breakfast eaters), but it was really delicious! 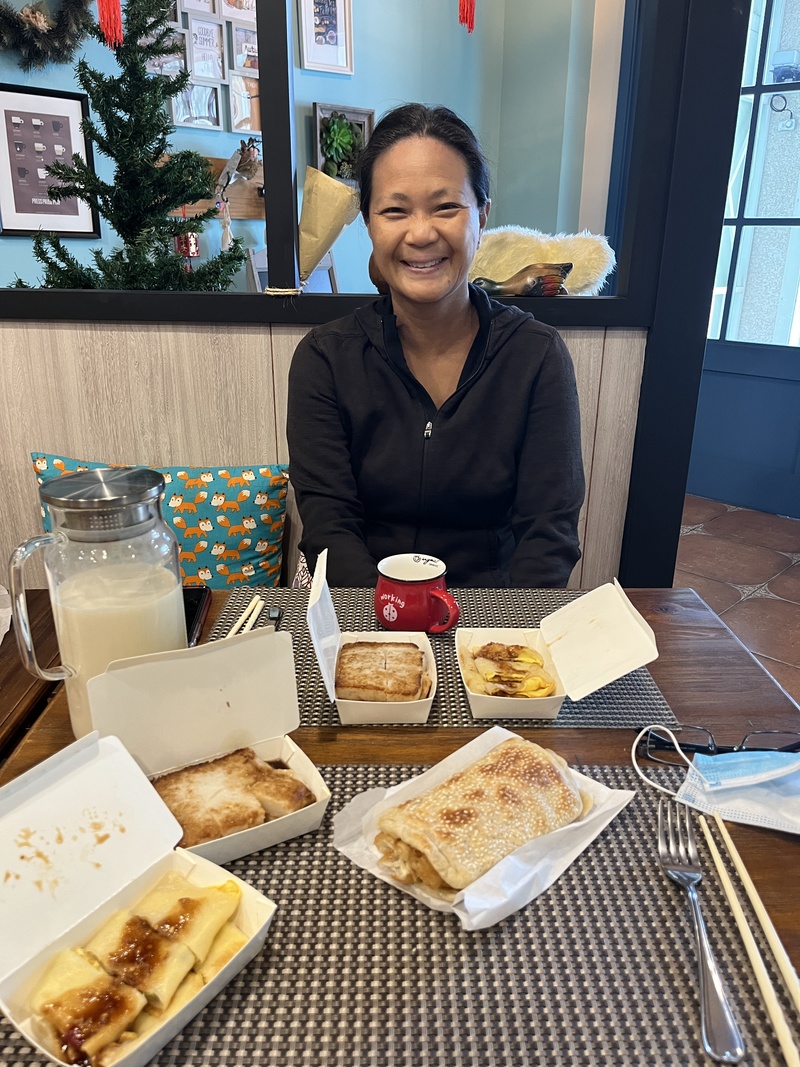 On our second day in Hualien, we had another new experience..  we felt our first sizeable earthquake.
As with any other regular day, we were just strolling down a street when all of the sudden the store windows started bending and the ground started to move - not just a small vibration - the ground actually moved horizontally in a left/right swaying motion. It happened so fast and only lasted a few seconds, but it really made our hearts race!  We went into panic mode and felt jumpy for some time after, but the locals around us did not seem affected at all.  After some research and talking to our B&B host, we learned that earthquakes are very common on the East coast of Taiwan, so I guess they are all just used to it! 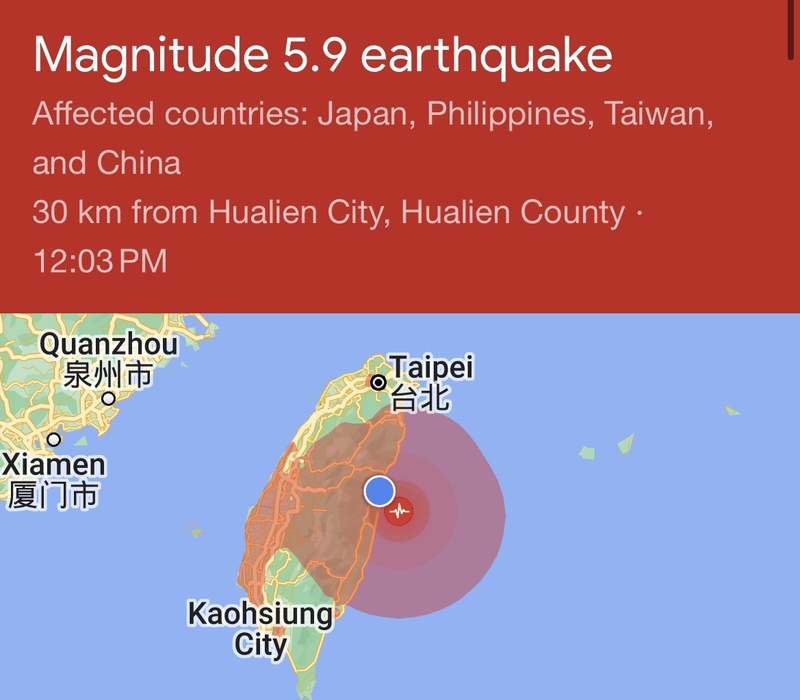