One of our main reasons to go to Taiwan was to do a cycling tour that Jen’s dad highly recommended: a 3-day bike ride along the East coast of the island.  Unfortunately the tour that David did was already fully booked, but we were able to book a similar 3-day tour that was slightly shorter (126 km instead of 160 km), called the Giant Adventures - East Rift Valley Cycling Tour. 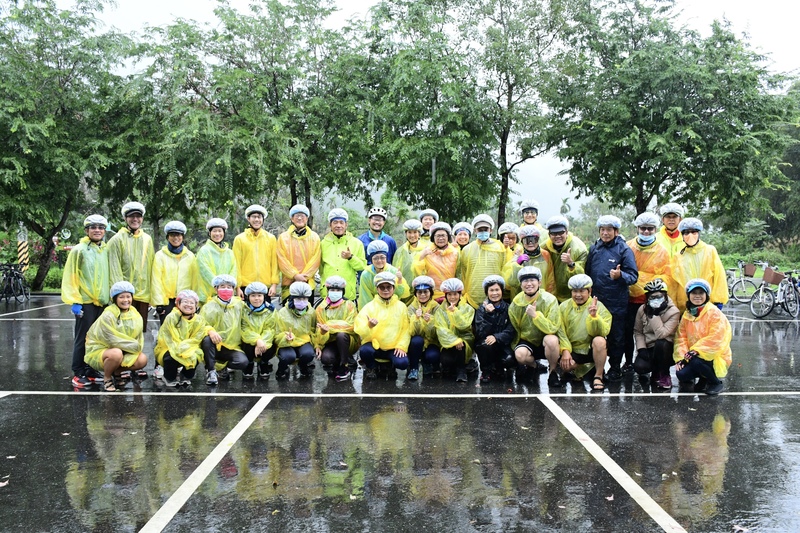 Day 1
Our first day started with a bus ride from Hualien to Guangfu where we had lunch.  We then walked to a nearby parking lot where we met the tour support team and all of the pre-sized bikes and water bottles were pre-labelled and laid out. 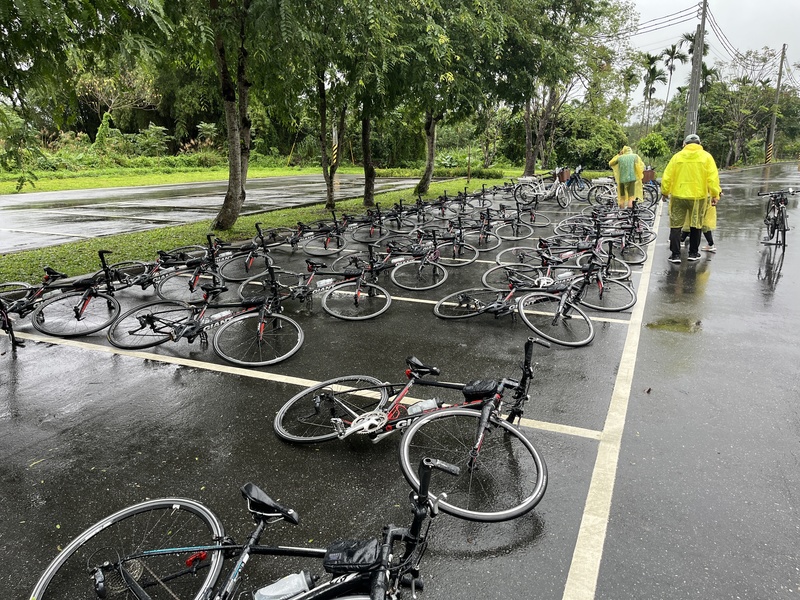 After an explanation of the equipment and bike safety (in Mandarin), we adjusted our seats and tested out our bikes to ensure everything was in good working order.  We then started our easy 26 km ride from Guangfu to Ruisui. 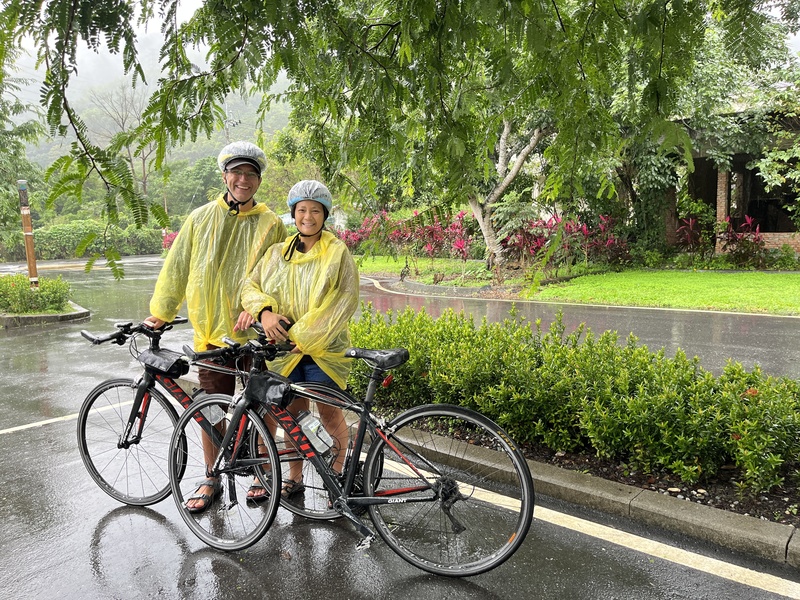 The weather was not on our side - it was raining fairly hard at times, but the Giant team was experienced and well prepared, providing us with rain covers and shower caps to go over our helmets.  It was a little chilly, but we still enjoyed the ride. 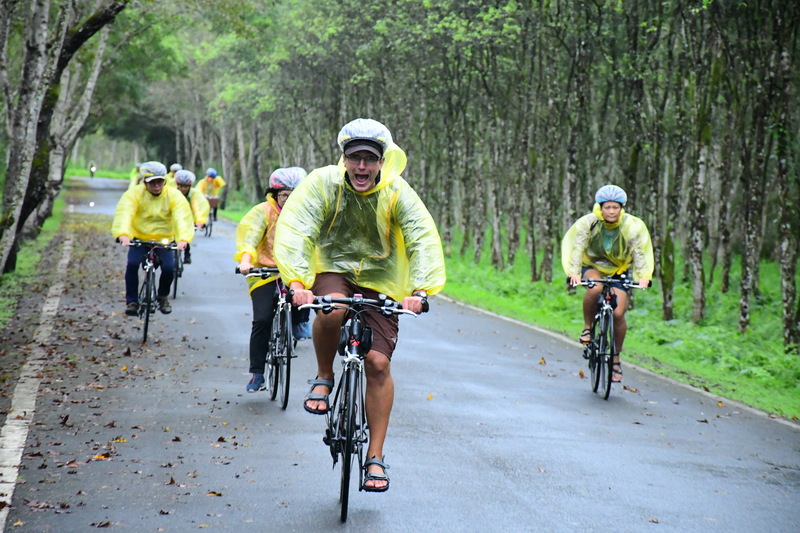 We made a number of stops along the way, including a sugar factory where we sampled a Popsicle made from Roselle juice.  It was very unique but delicious! 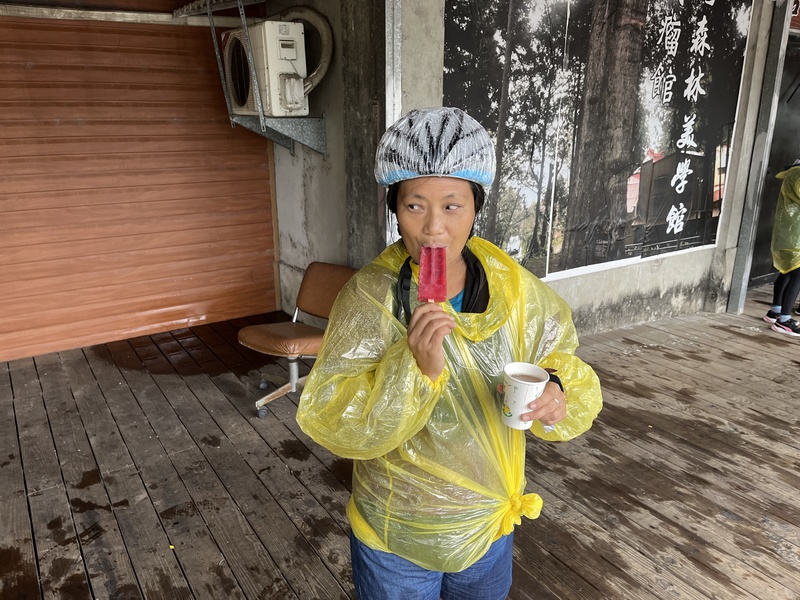 Our first hotel, Hoya Spa Hotel, was at the Riusui hotsprings, so we were given vouchers to use the hotsprings before meeting up for dinner.  It was perfect for warming up after the chilly riding day. 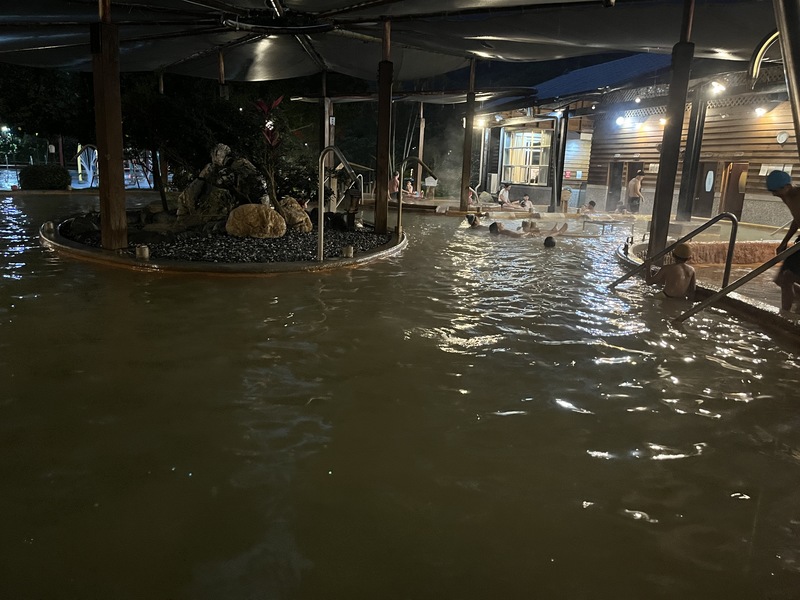 Day 2
The day 2 weather was a bit better - no sun yet, but at least the rain had stopped. This was our biggest day - 60 km from Ruisui to Chishang through various rice fields and villages. 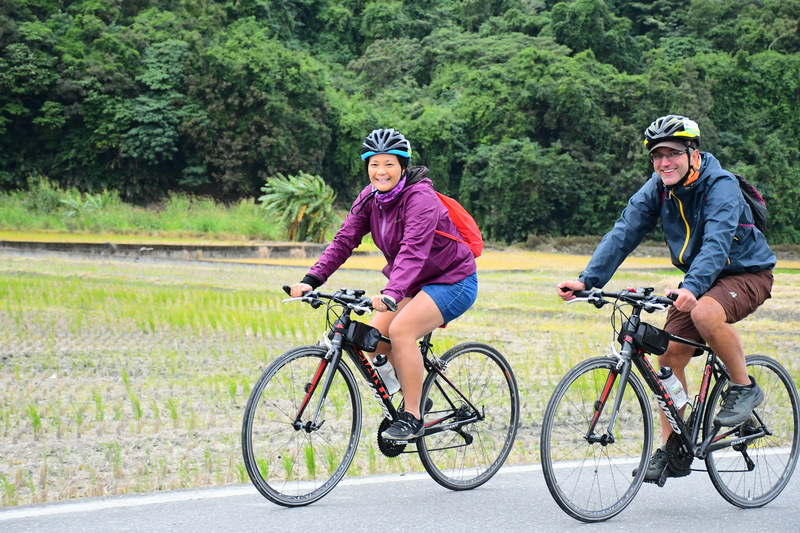 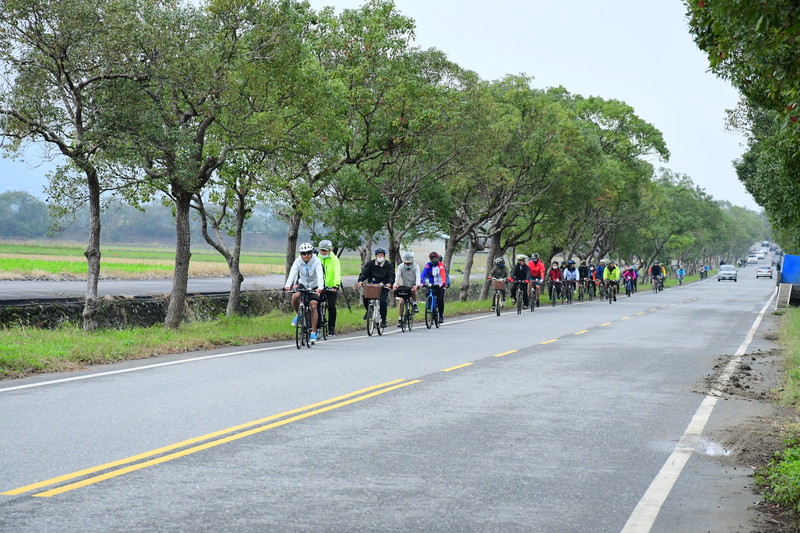 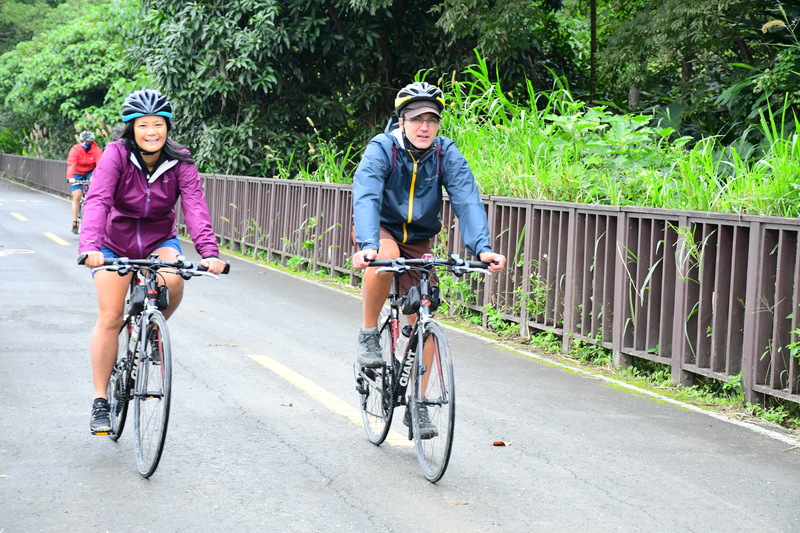 Even though there were about 40 people in our group, the tour was amazingly well organized.  In addition to a lead rider, there were also 2 other support team riders in the middle and back of the pack.  There were 2 support vans that followed us the entire route - one for bike support and one for photos and snacks.  Anytime we approached a section of road where there was a specific turn that we needed to follow, someone from the support van or team magically appeared at the intersection to point us in the right direction.

The bikes that they provided were excellent quality and in great condition (super fun to ride!) and if anything went wrong with a bike, the support van was there to resolve it immediately.  There was also a photographer taking pictures of us along the way, which they uploaded to the cloud and shared with everyone via QR code at the end of the day. 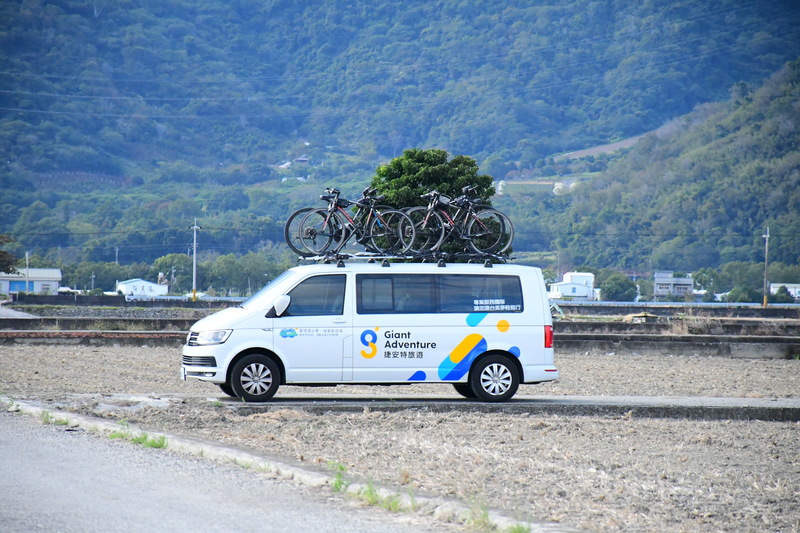 The route was broken up into several small segments with lots of snack stops along the way, including a factory known for their delicious (warm) milk and buns!  We also stopped in a village where you could buy rice snacks from a rice farmer cooperative.  Jen was addicted to some rice crackers that they bought for us to try.  The snack van provided hot and cold water, ginger tea, Pocari Sweat electrolyte packets, an assortment of cookies, candy, and fresh fruits, as well as sunscreen and bug spray. 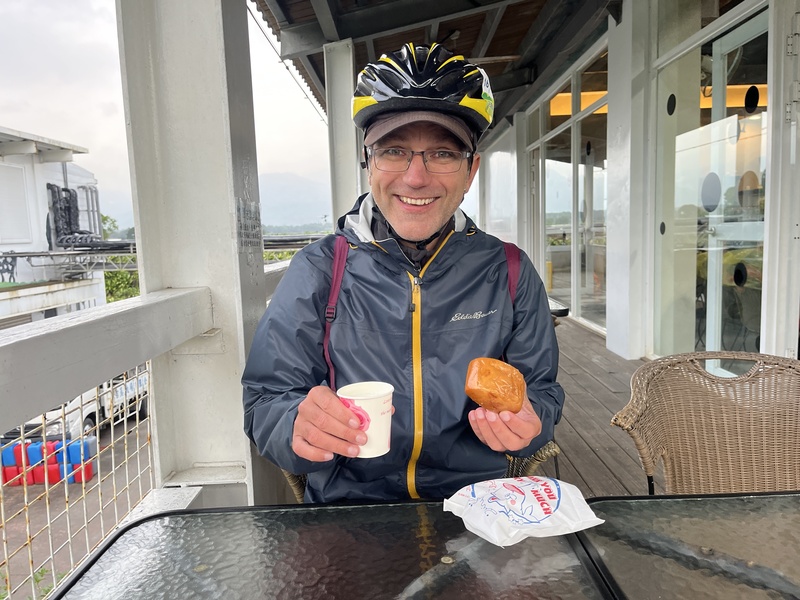 We finished our day at the Taiwan Sugar Pond Makino Resort.

Day 3
On our last day was a 40 km ride from Chishang to Guanshan, and lucky for us, the sun came out!

Since we couldn't understand Mandarin, some of the daily events were a surprise for us.  We started our 3rd day pushing our bikes around the property of our hotel and we had no idea why.. we arrived near a fence when suddenly a hippo popped its head out of the water!  It turned out our hotel was in an animal park of some sort, so we spent the first part of our day walking around to see the animals. 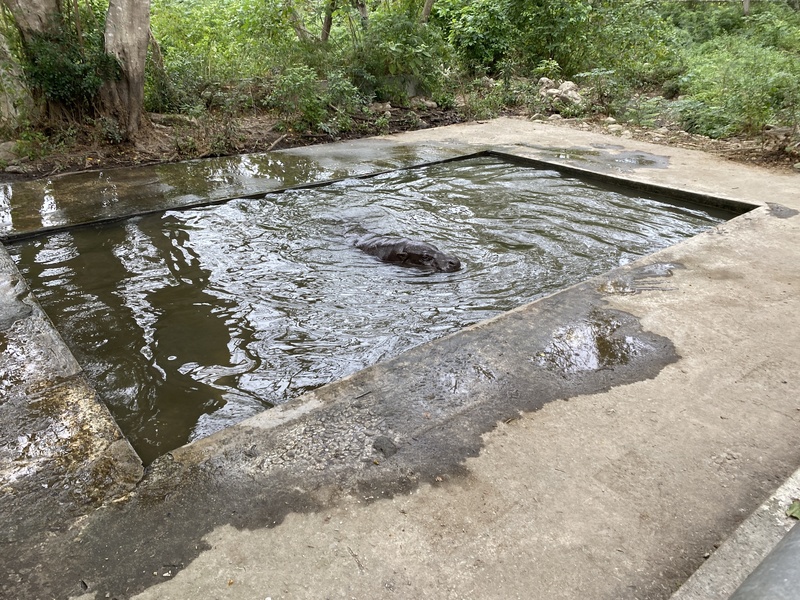 The rest of the day's ride was spent cycling through the local rice fields where international artists had art instalments in various areas along the route. 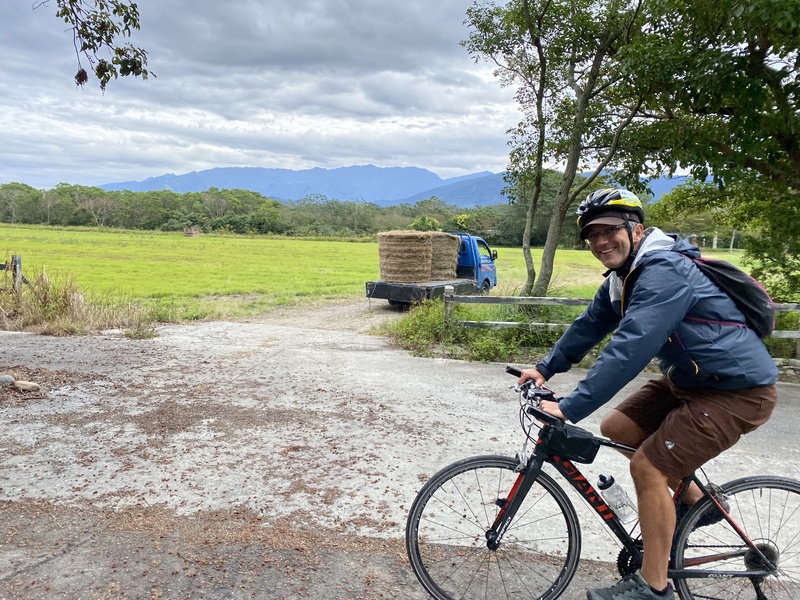 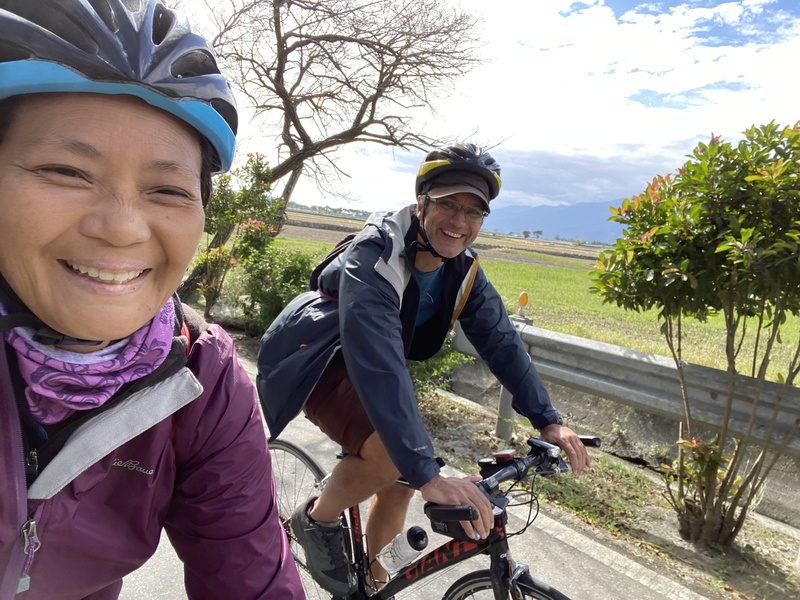 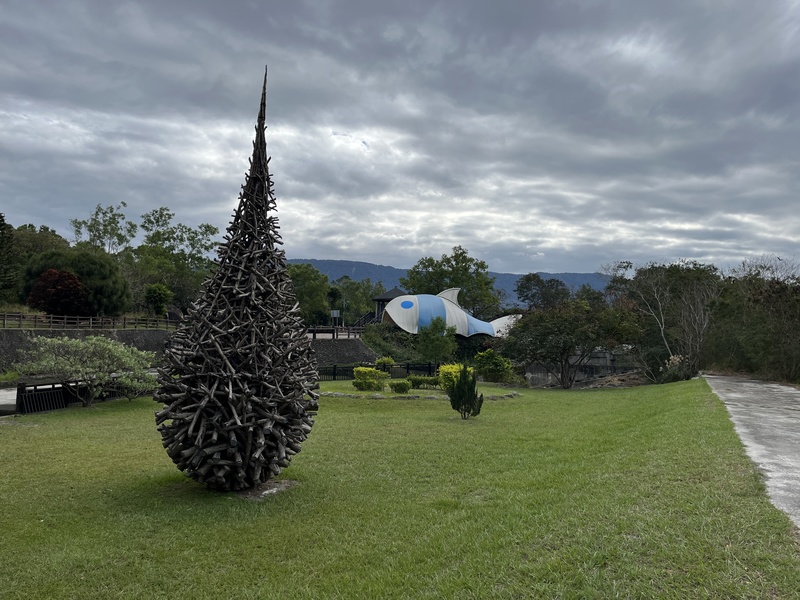 We also visited a tree in the middle of the rice fields that was apparently made famous because of a handsome actor that biked to drink tea under that tree, in an old EVA Air advertisement. We just went to another tree nearby to take individual pictures as the original tree was quite busy 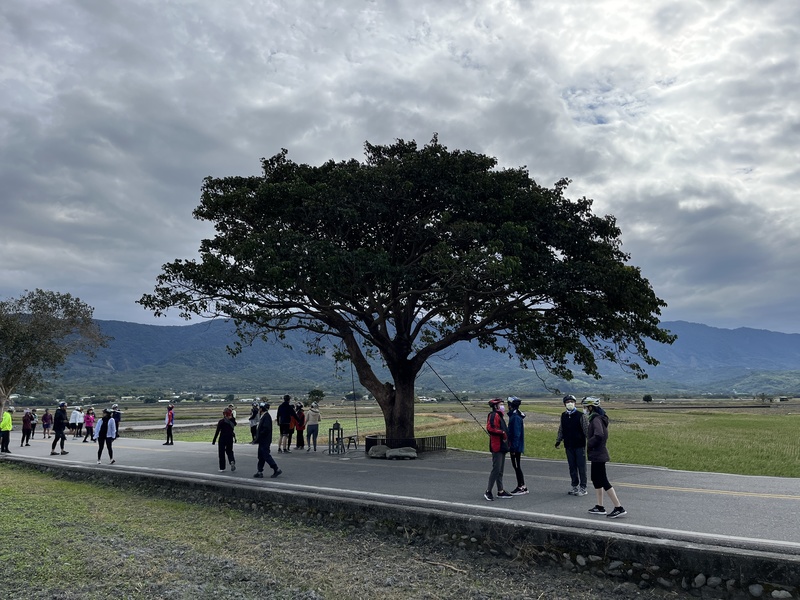 In addition to all of the snack stops along the route, we were fed huge breakfast/lunch/dinners with a good variety of local dishes.  Many of the areas that we visited are known for having very good rice - we thought "umm it's just rice..." but it actually did taste great and had a nice slightly chewy and sticky texture that we enjoyed.  Along the route, the tour support team also picked up some delicious dragon fruits that were red on the inside and the sweetest dragon fruit we ever had! 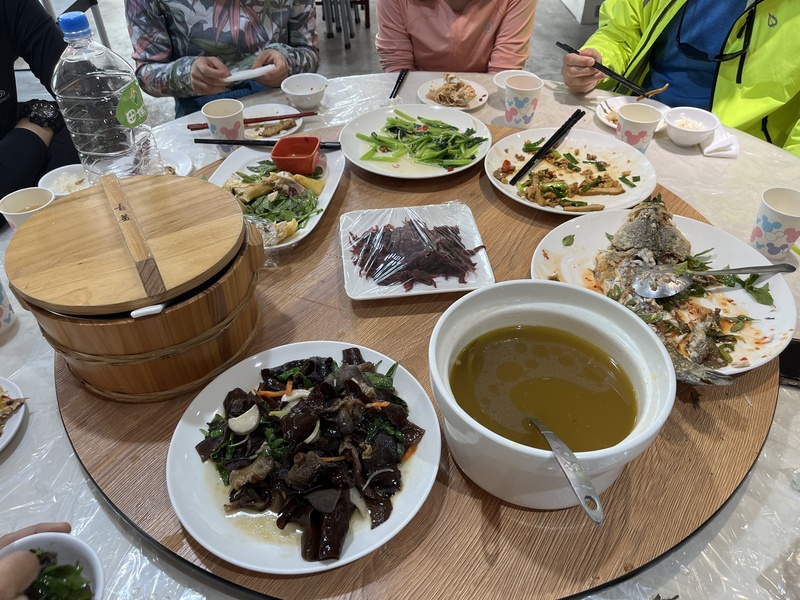 We ended our tour at the Guanshan train station.  After returning our equipment and having our last snacks from the back of the support van, we were given bento box dinners to take with us on the train-ride home. 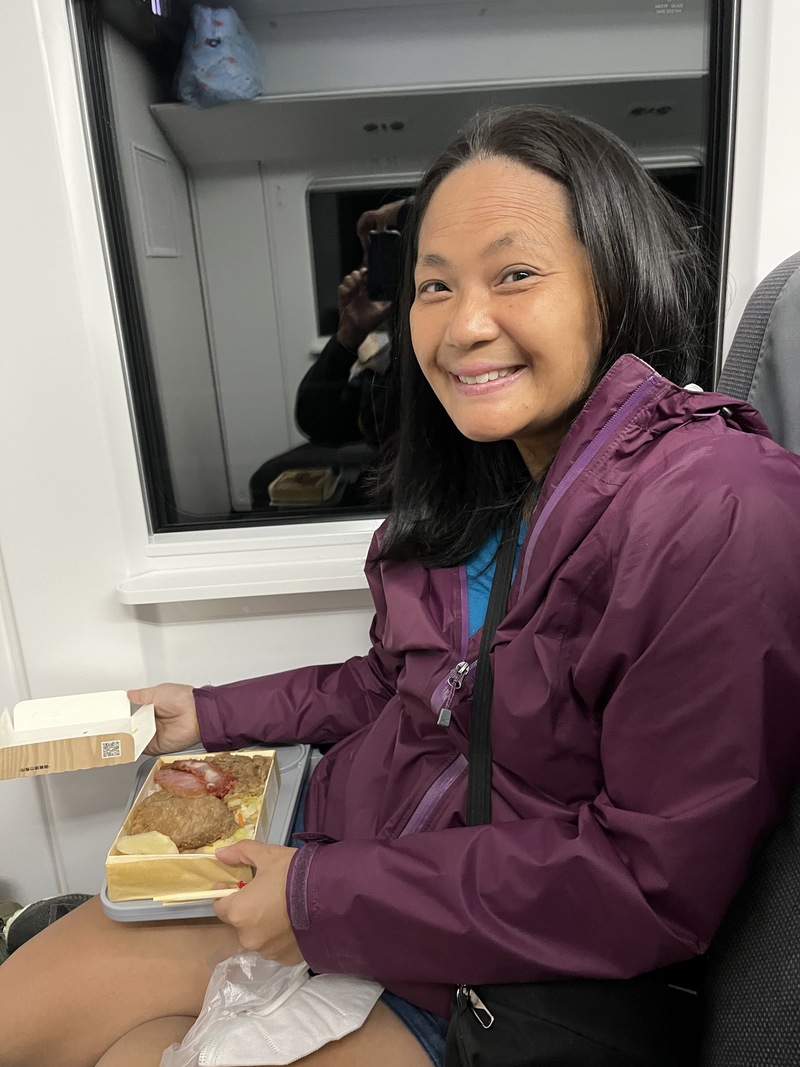 If you happen to be planning a trip to Taiwan, we definitely recommend the bike tours with Giant Adventures.  Here is the link to their tours: Giant Cycling World Travel